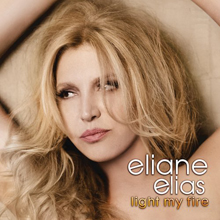 In a career that spans around 30 years and over 20 albums, singer and pianist Eliane Elias has come to epitomize a cool, sophisticated jazz sensibility, especially on the bossa nova songs of her native Brazil. On Light My Fire, she set out to extend the range of styles and grooves in her music and, in so doing, mixes Brazilian music with a couple of jazz standards and one or two famous pop and rock songs.

The Brazilian songs, which comprise the majority of the album, are splendidly cool and generate a real sense of positivity and optimism. Gilberto Gil's "Aquele Abraço" and "Toda Menina Baiana" are especially effective; Gil and Elias forming a beautiful vocal partnership on both, while Elias' daughter, Amanda Brecker, adds backing vocals to "Toda Menina Baiana." Elias' own "What About The Heart (Bate Bate)" is romantic and upbeat, the pianist's sparkling solo carrying the tune through to the fadeout.

The Doors' classic "Light My Fire" also gets the slinky, laidback treatment, but works less well. Jim Morrison's original vocal was a yell of desperation, as if the act of "lighting his fire" was the most vital thing in the world; here, Elias sounds far less concerned. This apparent lack of connection is also present on two versions of Stevie Wonder's "My Cherie Amour," one sung in English, the other in French.

The musicianship on Light My Fire is superb, with every player slipping effortlessly into the required groove. Even if a couple of numbers don't quite come off, it's still good to see established artists taking a few chances, and there's still plenty of music that does exactly what it should.