Dave Mihaly: Light in the Ring: The Ali Suite 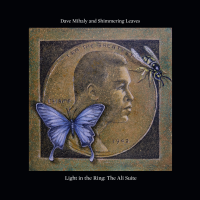 San Francisco-based drummer, percussionist, guitarist and pianist Dave Mihaly has long been a fan of boxing. And Mohammed Ali had been a hero of his youth. So he and his Shimmering Leaves Ensemble have taken it on in their sophomore effort to create a musical tribute to the life and legend of the legendary boxer and political activist. Light in the Ring: The Ali Suite (Calar Music, 2018) also plays tribute to what Mihaly refers to as "a sonic book," which references "Ali's rhythms in speech, jabs, and footwork."

Mihaly, known for his work with Jolie Holland, appears with saxophonist David Boyce (of the Broun Fellinis) and guitarist Michael Cavaseno, each of whom have penned a composition. The ten-track CD leads off with Mihaly on piano playing "Kentucky," a short solo piece dedicated to Ali's childhood home. The moody "Mentors (Get your bicycle back)" references a story regarding the theft Ali's childhood bicycle. The atmospheric "Rome"—Mihaly says it holds "a rhythm inside of a rhythm inside"—alludes to the Summer Olympics (where Ali won a gold medal for boxing).

The short, rollicking rap-poem "Poet of X," which includes a quote from Ali as well as one from Howard Cosell, features Mihaly on piano and Boyce on drums; Cavaseno plays metal resonator guitar here. "Ablution," a tribute to ritual bathing, features Boyce in soprano playing over Cavaseno's drone with percussive effects from Mihaly. "Poet of X" is a short rap-poem. Saxophonist David Boyce, best known for his work with the Bay Area band Broun Fellinis, leads with his surging tenor as guitarist Cavaseno's composition "Ali Vs. the State" begins.

Boyce's solo saxophone tune "Exile" reflects the loneliness and austerity felt by Ali and his family during his period of ostracism. Following "Return," which celebrates his return to the ring, the penultimate "End of an Era at Dawn/Rope a Dope" moves from lyricism to energetic romp, bringing the 47-minute suite to an upbeat conclusion. Well worth one listen—or many.

"Kentucky; Mentors (Get your bicycle back); Rome; Winter on then Mountain; Ablution; Poet of X"; Ali vs the State; Exile; Return; End of an Era at Dawn/Rope a Dope.