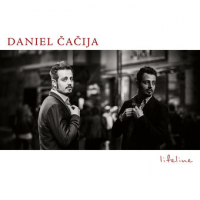 Vocalist Daniel Čačija is a snappy, if somewhat retro, dresser—the cover images on Lifeline show him sporting, variously, a dinner suit and a cravat. A quick glance at the track list reveals jazz standards such as "Detour Ahead," "Lush Life" and "Exactly Like You." The band is the classic piano trio, with added trumpet. It looks pretty much like a routine, if stylish, vocal jazz album... But appearances can deceive. On Lifeline, in the company of some excellent musicians, Čačija mixes classics with a few surprises to create a stylish but far-from-routine debut.

Čačija, a Downbeat Student Music Award winner in 2013, was born in Croatia, grew up in Frankfurt Am Main and studied jazz in Graz, Austria. He's an avowed Kurt Elling fan—Elling has returned the favor. There are a few times on Lifeline when his vocal resemblance to Elling is obvious: however, Čačija's voice is generally lighter and warmer, a reflection of his admiration for Nat King Cole and Sarah Vaughan. He can scat, too, although he could perhaps practice a little more economy with its use.

Of course, Lifeline does consist mainly of straight-ahead performances, with Čačija demonstrating his American Songbook chops in impressive style. "Detour Ahead" is one highlight, his voice controlled, pitch perfect, yet emotive and heartfelt: on "I'm Gonna Lock My Heart" he swings and has fun with phrasing. There's also a graceful arrangement of Donny Hathaway's "Some Day We'll All Be Free" and Eddie Jefferson's vocalese lyrics for "I Cover The Waterfront" (titled "I Just Got Back In Town") give Čačija a chance to show his '40s hipster credentials on a duet with the equally hip bassist Ivar Krizic.

It's the three new songs Čačija brings to the table that establish his potential as a genuinely innovative performer. His version of "No Church In The Wild"—originally performed by Jay Z and Kanye West who get co-writer credit with no less than seven others—swings like a jazz standard while his vocal gives real strength to the lyrics.

Čačija also performs his own arrangements of two traditional folk songs: the Macedonian "Precious Me, Precious You" and the Croatian "Little Red Rose." The arrangements and Čačija's English lyrics skilfully draw both songs into the jazz pantheon. "Little Red Rose" is especially effective: the opening freeform arco bass sets up the mood for this sad ballad's tale of lost love.

Although most of Lifeline was recorded at KUG Studios in Graz during April 2014, Čačija recorded the last three songs live at the Jazzkeller, Frankfurt Am Main, later that year. "Lush Life" is beautifully performed, with pianist Tuomo Uusitalo providing sympathetic backing: the pair give the song the right level of drama and the singer's phrasing is spot on. An impressive debut all round: it doesn't seem too risky to predict that Čačija is set to become one of the finest jazz vocalists of his generation.

No Church In The Wild; Strollin'; Little Red Rose; I'm Gonna Lock My Heart; Detour Ahead; Seesaw; Someday We'll All Be Free; Precious Me, Precious You; I Just Got Back In Town; Day In, Day Out; Lush Life; Exactly Like You.