By BRUCE LINDSAY
December 7, 2010
Sign in to view read count 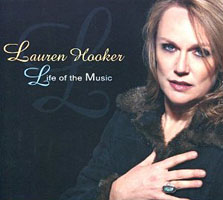 Singer and pianist Lauren Hooker takes chances on Life Of The Music, her second album. She sets her own compositions up against classics of American music, re-works old favourites and uses some vocal shifts and inflections that other singers might think twice about. And thank goodness she does, because in doing so Hooker has assembled a refreshingly original set that both challenges and brings out the best in the singer and the top-flight band that accompanies her.

Hooker's voice has an edge to it—it's not the standard soft-focus sound that seems to have become the norm for many new generation jazz singers. At first this can sound comparatively harsh but over time it becomes obvious that this edginess gives Hooker's sound a sensual quality all of its own. There are hints of Anita O'Day, of Joni Mitchell—not only on Mitchell's "Song to a Seagull" but also on Hooker's own "I Lied"—and even of Britain's Norma Winstone, but ultimately Hooker's voice has its own distinctive character.

The band is also distinctive. Scott Robinson, a terrific horn player who is equally at home with the Great American Songbook and the cosmic sounds of Marshall Allen, plays exquisitely throughout the album—his soprano sax on "Life of the Music / Your Music Brings Out The Poetry In Me" flies and soars above the vocals and his flugelhorn solo on "I am Doing Very Well" adds greatly to the song's mood. John Hart plays some beautifully fluid guitar—his acoustic guitar solo on "I Lied" is an album highlight—while "Song to a Seagull" benefits from Mike Richmond's cello. Richmond moves to the acoustic bass to join Hart on a sparsely beautiful backing for Hooker's vocal on Betty Comden, Adolph Green and Leonard Bernstein's "Some Other Time."

Hooker's cover versions are always interesting. Her version of Richard Rodgers and Lorenz Hart's gorgeous "Spring is Here" is an intriguing re-interpretation of the Songbook classic and on Walter Donaldson and Gus Kahn's "Love Me or Leave Me" Hooker's confident approach makes the vocal more of an instruction than a plea. Hooker's own covers are stylistically more straightforward, but she writes insightful lyrics and her phrasing and emphases work well in enhancing their impact—it's only the standard blues of "Countin' On The Blues" that sounds ordinary.

Special mention must go to "Life of the Music / Your Music Brings Out The Poetry In Me." Hooker wrote the first half of this coupling around a poem handed to her by its anonymous author at a Greenwich Village gig. On the second part the poet Jeanette Curtis Rideau takes over from Hooker to recite her own words over the music. The whole composition has a real after midnight beat poet feel, heightened by Martin Wind's bass and Robinson's soprano sax. This is Hooker's most impressive and original composition on Life Of The Music, a consistently imaginative and superbly performed set of songs.