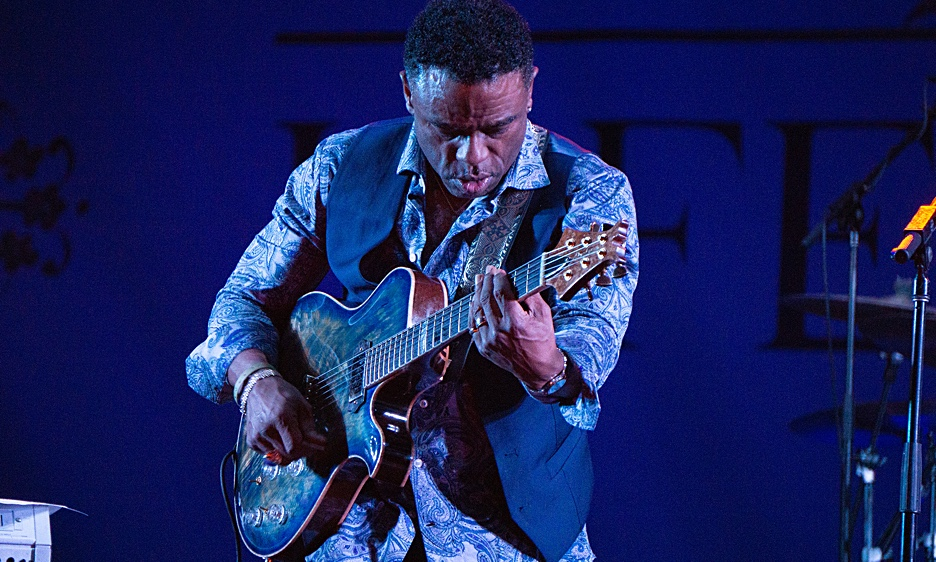 Life Luxe Jazz -The Los Cabos, Jazz Experience took place at the Pueblo Bonita Pacifica Golf and Spa Resort November 1-4. The first annual Life Luxe Jazz Festival flourished under the beneficence of the Mexican sun, as it grooved into life. The cradle of limitless sand, and sea with the subtle scent of spices from the grill, was the perfect birth place for a festival touting a luxury cultural experience with jazz as the focus. The goal was to bring together people with common interests in music, culture and cuisine. They also sought to appeal to those with discerning tastes and global consciousness, interested not only in their own best experiences, but also, in spreading health and cross-cultural enrichment to the local Los Cabos community through charitable organizations.

At the tip of the Baja, California Peninsula, where the powerful Pacific meets the calmer waters of the Sea of Cortez, a sprinkle of huge, granite rocks, jut up from the rippled, turquoise sea. Like the breaching whales that populate these waters, each sighting is a shock for the senses. The most famous landmark, a hollowed rock formation called El Arco, embodies the rough magic of this setting.

The festival was a combination of smooth jazz favorites and rich R&B vocals, but like the unexpected jagged surprises in the environment, the performers brought the rough with the smooth, reprising historical references to contemporary jazz, R&B, rock and funk classics, while weaving in newer releases.

This thirty-million-year-old promontory, nick-named Land's End, gives the beaches of Cabo San Lucas their own tidal rhythm of pounding surf, against dessert sand. Whether it's the passionate roar of the Pacific, or the soothing wash provided by the Sea of Cortez, these contrasts reveal the tremendous geological forces that created these wonders. There are a pair of twin beaches connected through a narrow valley in the mountainous rocks that span the tip of the peninsula near El Arco. Lover's Beach, faces the smooth waters of the Sea of Cortez, while Divorce Beach, faces the rougher, more dangerous waters of the Pacific.

Like nesting parents, the festival founders located an ideal spot to share a love of music, nature, and cultural exchange. This thought was echoed by many of the performers, as they commented on the beauty and made pitches from the stage to return next year. Los Cabos has a rich jazz scene and history, with several clubs and community arts and music festivals during the year.

The lineup included a who's who of the smooth jazz and R&B genres. Headliners, Boney James, and Norman Brown, were thrilled to be there as were festival veterans Najee, Bobby Caldwell, Keiko Matsui, Maysa, Meli'sa Morgan, Michael Manson, Kirk Whalum, Lin Roundtree, Gregory Porter, Mindy Abair , and Lindsey Webster. Many of the performers have their own charities, and global causes.

The Pueblo Bonita Pacifica Golf Spa and resort could not be a more inspired venue. The posh five star resort, with a Jack Nicklaus golf course and world class spa, spread across the desert setting with different levels of seating, from a VIP veranda with sofas, to white sheeted cabanas, to festival style canvas chairs. Food and drink was convenient to seating, whether acquired from the bar and food line, or ferried by waiters.

The singer/songwriter, Lindsey Webster opened on Saturday, her smooth, introspective love ballads ushered in the arrivals, as they stopped at the food and drink oasis, before finding their seat. The mid-afternoon sun brought out sorely needed hats and sunglasses, as the ladies swept by pools in gauzy whites and bright florals, while the men sported tropical shirts, roomy capris and leather sandals.

Lindsey Webster has gained worldwide popularity since her first single, "Fool Me Once" went to the top of the Billboard Jazz Charts in 2016, the first vocal to do so since Sade's "Soldier of Love," in 2010. On her last two albums, she has songs featuring fellow festival performers Kirk Whalum, "One at a Time" Back To Your Heart 2016, and Norman Brown "Free to Be Me"Love Inside 2018. Her version of blue-eyed soul crosses genres easily from jazz to pop to R&B. Her vocals are light and airy and go down smoothly, until she turns unexpectedly sultry. It was a great start to the show.

Kudos to the sound director, and technicians, all the acts had a beautiful clear sound that was much appreciated by the artists themselves. A smooth jazz and R&B playlist filled the intermissions between performers, allowing the audience to socialize and take comfort breaks.

The next performer, Najee, needs no introduction. With two Platinum, and four Gold albums under his belt, he is the ultimate smooth jazz and R&B icon. From his Stevie Wonder Tribute album, Songs in the Key of Life, he played "Sir Duke." He engaged the audience easily, as he went into "Knocks Me Off My Feet." and called the ladies and then the fellows to singalong.

Whether demonstrating his mastery as a flautist or saxophonist, he is always a sure bet, and right in the smooth jazz, R&B pocket. His skill makes his runs so effortless, it seems almost too easy, but taking him for granted would be a mistake because there's always a surprise around the next corner. After twenty-five plus years in the business he has an unerring instinct for choosing the right vocalist and accompanying artists. Najee gave a tribute to the legendary jazz trumpeter Roy Hargrove who had passed away at the age of forty-nine the day before. Hargrove had played on a song of his called "We Gone Ride." Najee said he appreciated him and would miss him. He dedicated the next song to Hargrove.

R&B songstress Meli'sa Morgan joined Najee on stage to provide the vocals to "Funny Valentine" a song for which Hargrove was well known. She encouraged the audience to feel the music, her voice soaring on skilled runs. Later they performed "In the Mood to Take it Slow" a slumberous ballad from Najee's 2013 album, The Morning After, which the audience really seemed to appreciate.

Meli'sa Morgan allowed a brief interview after her set, mentioning her excitement about being invited to Cabo. "I had contact with one of the organizers, Edward Roebuck, who I had worked with on Sheryl Lee Ralph's "Divas' Simply Singing." "He said he liked my voice and knew I sang with Najee sometimes. He said he would pitch for me and Najee to be invited to perform at the festival." At that time, over a year ago, she didn't know what Life Luxe Jazz was. When she received the invitation, she said she was excited about working with Najee again and about coming to Cabo for the first time. She has a new CD called Love Demands and she appreciated the jazz fans purchasing it and knowing her work.

"This has been a wonderful experience, the setup on the beach, the ambiance, the audience, the food." She said she liked the camaraderie of seeing artists like Kirk Whalum, whom she had not seen since they both worked with Whitney Houston. and getting to meet some artists for the first time, like Maysa. Her only regret was that her schedule required her to fly back out the next day. "If I had the time, I would stay longer..." When asked about the relationship between R&B and jazz, she replied, "I think that has always been. I don't think you do good R&B without doing a little bit of Jazz. Because you have to have the flexibility to be creative and be unconstructed and jazz allows you to do that. It doesn't have to be so dang proper. You have to know how to go off the radar and come back, musically, you know, and jazz allows you that and you put the structure of R&B with that together...awesome!."

Bass guitarist Michael Manson was introduced to feature, and also later play along with friend Kirk Whalum whom he introduced as his brother from another mother. Manson greeted the audience then performed the song "Coming Right At Ya" from his 2014 Thumpin' album. His signature base guitar riffs and gravelly vocals were familiar yet fresh. Both men have a history of being supportive sidemen but while Whalum stepped to the fore in the 80's forming his own band and developed his voice and writing, Michael Manson's emergence as a leader happened on his 2002 album The Bottom Line.

Manson began engaging the crowd by talking about how most people assume musicians have rhythm in all areas. As he began to play a Latin tempo, the intro to his hit song "Just One Touch" from his 2002, The Bottom Line album, he shared the story of taking salsa lessons with his wife and finding out that his rhythmic talents did not include dancing. He asked the audience to get up and demonstrate their prowess and many did. Manson performed "There's Nothing Better Than Love" from his 2006 Just Feelin' It album. Lauretha Martin sang vocals, her runs and riffs, free and improvisational. Manson claimed his Chicago roots as he went into his next song "Outer Drive," a jamming tune with a saxophone groove from his 2008 album Up Front . On that 2008 album, he collected the top rung of smooth jazz performers, including fellow festival performers Kirk Whalum and Norman Brown.

Manson announced he was going to perform Bill Wither's "Lovely Day" "Chicago steppin' style, as Kirk Whalum joined him on the stage. Kirk Whalum took over toward the end with a long solo, that veered between a jam and a smooth vibe. Whalum gave props to Manson as he took over the stage." That's a bad brother right there, Michael Manson." Saxophonist, Kirk Whalum is the winner of twelve Grammy nominations, since 2001. He toured with Whitney Houston for seven years and had a standout performance in the saxophone solo in, "I Will Always Love You." Whalum also toured with Luther Vandross and keyboardist Bob James. He was a session player for artists such Barbara Streisand, Al Jarreau, Quincy Jones and many others. His hit "For You" was a career high, and also his three albums in theGospel According to Jazz series.

Kirk Whalum greeted the audience in Spanish and played Grover Washington's "Mister Magic." Then he took the audience to church, by relating the words to Whitney Houston's song "I Will Always Love You," to the resurrection story. He played the instrumental similar to the version from his 2017Love Covers # album with the vocalist joining in the last minutes. He finished his set with "Wade in the Water" from his 1998 Gospel According to Jazz, Chapter 1 album.