By PHILLIP WOOLEVER
January 29, 2011
Sign in to view read count 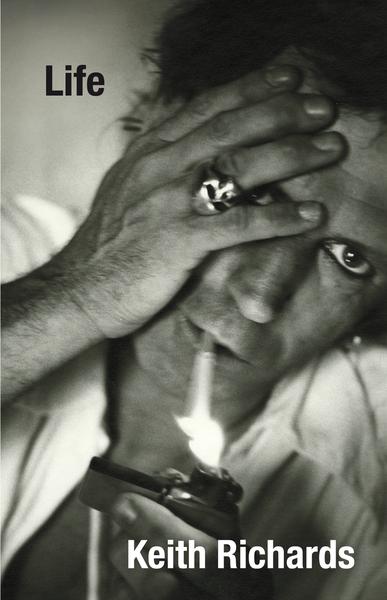 Life is a last laugh lullaby.

In guitarist Keith Richards' well-received and heavily hyped reflection, the defiant rock icon, humble blues ambassador and momma's boy family anchor keeps a laid back focus on the world around him since childhood. The The Rolling Stones get cast through glass houses from London to Connecticut, with highlighted ports of recall in Jamaica, Muscle Shoal and the Cote de' Azur.

Richards' narrative voice remains a consistently engaging authority throughout every escapade. It's easy to imagine bits of muttered phrases trailing off, and much of the volume reads like a transcript of Richards' comments and summaries while perusing attributed diaries.

It's a very thick line between average bloke and international idol, but Richards achieves a vital, personal connection; puns intended. Unlike vanity projects, revisionist rehash or the complete PR nonsense that often belches up in this literary category, Richards conveys a genuine range of emotions; sometimes raw, sometimes remixed. The book definitively pulses from a singular perspective, this one a compelling cornerstone of contemporary music sagas.

Is Richards telling the truth? It almost always reads just like it.

The whole truth and nothing but? While the effort reads honest, Richards' claim to clearly recollect ancient activities sometimes clashes more than slightly with admittedly altered perceptions. A few proposals, like the estimation of how little he's slept ("I have been conscious for at least three lifetimes"), are hard to fathom. Rock and roll, baby.

To avoid diminishing any reader's ride, suffice it to say that anyone with a basic interest in popular culture over the last five decades, especially fans from the UK or US, will find all sorts of zany insights, everywhere from the top of the social food chain to the lunatic fringes.

There is no soul searching on Richards' behalf, but there isn't any apparent denial or justification of debauched adventures beyond describing immediate circumstances, either.

Only the subject himself knows for sure how much is "fact" or "truth," twins of prodigal glimmer that sometimes run parallel and sometimes crash head on. Anecdotal insights as to where things like trademarks or timeless tunes originated are sweet morsels sprinkled throughout. A foundation of collaborating memorabilia is consistently listed.

Little is elaborately illustrated as the authors keep details personably simple. The non-superficial formula works for most of this thick tome, no small achievement in Richards' multi feathered cap. Richards (and co-writer James Fox) could have continued for many more pages on narrative strength alone without digression.

A rollicking opening yarn detailing a redneck, Boss Hogg/Dukes of Hazzard-type Arkansas drug bust establishes high altitude for strong storytelling skills that carry this book above and beyond.

Plenty is minimized or omitted. With as many iconic settings and characters to discuss that's understandable, unless you were looking for 2,000 pages. Richards' best musings involve the core of his artistic process. Guitarist Brian Jones is recognized and illuminated. Altamont is not. Dance with what brung ya, little sister.

The book garnished a big publicity push, behind reviews from other musicians and celebrities who haven't reviewed another book in many a light year from home. Marketing aside, Life has remained atop winter bestseller lists in many languages. The success is highly deserved, as the book earns its high merit, line after line. Some non-spoiler samples:

"Oh guess what? Keith Richards is on smack. What else is new? The idea of the Prime Minister's wife buzzing around the hotel trying to get laid was another thing."

"I had to stop him (Billy Preston) beating up his boyfriend in an elevator once. Billy hold it right there or I'll tear your wig off. He had this ludicrous Afro wig."

"And the way he (Charlie Watts) stretches out a beat and what we do on top of that is a secret of the Stones sound. Charlie's quintessentially a jazz drummer, which means the rest of the band is a jazz band in a way."

Shooting pool is a popular pastime in Richards' haunts and his voice flows off the page without fluff, as if you were engaged in scattered conversation between lining up eight balls, miscues, and trick combinations. Richards is a magician that isn't afraid to reveal basic, simple secrets because he knows the trick is more than just the trick alone.

Subjects include contemporaries from guitarist Eric Clapton to singer Willie Nelson ("A beautiful weedhead, is Willie. I mean straight out of bed. I at least wait ten minutes in the morning"), and wide ranging musical tastes. Women and honkey tonks are often sacred ground. Singer George Jones is applauded. Led Zeppelin not so much. Richards reserves his highest praise for the Chicago bluesmen like harmonica player Little Walter who inspired him.

Instead, the group became saddled with staying true to its roots and then proving worthy of its "world's greatest rock and roll band" moniker. Richards clearly retained that early motivation. Part of the Stones' legacy is its lasting contribution to blues history and the genre's global identity. Music as a labor of love. The work was hard, the ethic disciplined; the karma paid off.

Despite what some shoddy reviews reported, Richards also has plenty of good things to say about singer and frontman Mick Jagger. Without a formal count, overall there seems to be more praise than poison, and plenty of credit for his estranged collaborator, though some acknowledged dues come with a backhanded sting.

By unscripted virtue of his place in the pantheon of popular performers, Richards transcends most standard rock star reflections. He casts a disapproving light on some suburban legends and verifies others with reportedly firsthand witness testimony.

There are abundant off the cuff takes for insights into pop culture peers, but not much is in depth. Richards tells some great stories, but there are few lengthy portraits whether someone is loved, reviled or, as in Jagger's case, both. That's fine enough since Richards' one-liners usually find the heart of their targets.

Richards sums up many folks with around a half dozen words. Some tidbits made for great publicity blurbs and tweaked the tabloids' social gullet, but in full context the book shows minimal snide intentions. Generally, Richards sounds like a typical English mate who'd joke at you and respect a bigger joke in return.

Artistic observations are admittedly biased, never too mechanical and usually quite earnest. Richards makes no great technical claims. Instinct is everything. To hear him tell it a central pillar of modern rock music comes down to a cherished Jimmy Reed "five chord" taught to Richards by the unlikely tutor Bobby Goldsboro (think about what Richards might do with "Honey") on a tour bus, one of many delightful surprise acknowledgements.

Forgive us lads, but you can judge a book by its cover and you can get plenty of satisfaction. This well-crafted volume boasts a beautiful jacket shot from David LaChapelle and includes more family snaps than celebrity poses. Smiles are sincere, and despite all the alleged debauchery Richards seems to have ultimately provided a stable, improbably quaint household for quite a brood. Some people create a private inertia and orbit a personal universe. Reading Life provides a sense of both the everyman type common ground and extraordinary privilege in the realms Richards rolls upon.

A stark, memorial description of his deceased two month old son reveals enough about Richards' persona that even a partial quote is a disservice to both author and audience. Conversely, much publicized, supposedly negative comments like some regarding Jagger ("tiny todger") or John Lennon ("silly sod") were, in context, exaggerated.

Many consumers, and thus editors, are motivated by celebrity gossip so there are many famous folks indexed, but some of the name drops read more like a hasty VIP checklist.

Is it undeniable poetic justice that Jagger is by far the author's most interesting subject, just as Richards would probably be should Jagger reach for the pen? That's really no surprise since Richard and Jagger helped equally create each other's mythology. Still, anti-Jagger jabs hint at bigger bangs until becoming an almost anti-climactic tease.

Because the writing on Jagger includes many angry personal details, whether Richards' final embrace near the book's ending is heartfelt or concessionary remains unclear. If Richards couldn't come up with any physical confrontations or cockslinging duels between the Stones alpha mongrels, we might at least be privy to how Richards envisions a potential brawl turning out.

A heralded literary endeavor like this begs the question of how many chapters Richards actually composed himself. Any fair journalist can sift through basic historical data and weave picturesque paragraphs in first person to enhance whatever a subject dictates. Instead, there's a nice gut feeling at play here. Frequent staccato style summations expressed in very few words give a sense of Richard throwing off the cuff remarks that often summarize more than just his viewpoint. Did you fancy it enough then? Very much.

This is a book about families: through blood, commitment, art. Richards invites us to gather around the supper table, where there's even his recipe for bangers and mash.

Here's another chapter to that bountiful bayou of blues roots "crossroads" mythology about traded souls and salt of the earthly goods. Much of this tale unfolds in the public eye, available for repetition through countless media for almost six sensationally scarred decades. In this verse, the Devil loses his unforgiving, tortured spirit and gets nothing in return like mystic musical prowess from the blasphemous bargain.

At the other dead end of the street, Richards strolls away smiling (or was that a smirk?), new skull ring and another memento in his custom guitar case. Lady Luck dances naked, on Richards' side of the riff and the story.