By GLENN ASTARITA
December 3, 2017
Sign in to view read count 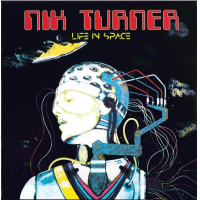 The British reedman, vocalist, and former member of the legendary space rock band Hawkwind navigates the cosmos once again. For some, Life in Space may equate to solitude and awe, but Nik Turner's festive approach may be more conducive to joyriding on Comets. Indeed, the artist's vocals take on an air of innocence, often mixed evenly among the sprinkling and streaming electronics effects atop sprawling grooves and drummer Jason Willer's thrusting backbeats. Whereas, many of these works contain memorable riffs and hooks, contrasted by Turner's blissful flute passages and adventurous sax phrasings that often skirt the free jazz realm.

Keyboardist Hephera Moon employs an arsenal of synths to instill a sense of prog rock antiquity. But guitarist Nicky Garratt's crunchy wah-wah lines on "Why Are You?" ride above a firm pulse with bristling electronics treatments and the leader's mellow-toned vocals. Here, the band sports a big sound. Moreover, former Hawkwind members violinist Simon House and guitarist Jim Rudolph lend their wares on various tracks.

ADVERTISEMENT
"Back to Earth" is an up-tempo celestial ballad featuring Garratt's harmonious acoustic guitar parts and an endearing melody, spiced with whispery melodic content and Bryce Shelton's steely bass lines that anchor the ensemble's propulsive momentum. Other works are dappled with Turner's mystical and echoing flute phrasings via layered backdrops constructed on existential implications and simple ostinatos. However, "As You Were" pronounces a doomsday metal outlook, seemingly executed in a remote galaxy where old stars die, and planets collide, due to the musicians' fiercely wrought connotations and accelerating pace.

Turner closes out the program with the Hawkwind classic "Masters of Reality," as Bryce dishes out the prominent bass groove and Turner's swirling sax solo generate a bit of high heat to round out this archetypal space rock delight. For nearly 50-years the artist has been applying his craft and continues his plight of transmitting good cheer back to earth during his treks into fringes of time and space.

End Of The World; Why Are You?; Back To Earth; Secrets Of The Galaxy; Universal Mind; Approaching The Unknown; As You Were; Master Of The Universe.