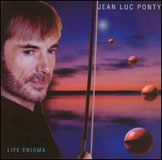 A living legend looks both backwards and forwards, crafting unique music of profound elegance. It’s been a while since Jean-Luc Ponty graced us with a solo album of this caliber. His rewarding detour into The Rite of Strings is behind him for now as the electric violinist revisits the pop-jazz fusion that made him a megastar in the 70s and 80s. Life Enigma is no regression, however. The pop consciousness of his past is transfigured into a sound more appropriate for the new century. Ponty also takes good advantage of modern technology while avoiding tacky musical excess for the most part, a feather in his cap. And as the track titles will attest, his inspirational, imaginative musings on the state of life and the universe are still intact.

This is the first time that Ponty has ever explored home digital recording, and the results give pause. He is the sole performer on three tracks. “2001 Years Ago”, the opener, immediately brings us back to everything we ever loved about Ponty, all the energy, atmosphere, creavitity and pinpoint technical accuracy. The melody of this track is somewhat reminiscent of French popular song from early in the 20th century, perhaps a nod to his roots. Here and elsewhere, he uses potentially cheesy electronic sounds in exotic ways that eliminate most of the cheese. “Lonely Among All” is carried upon a quiet, meditative pulse that wraps around the listener. “Pizzy Cat” is especially unusual and beautiful, as his electric MIDI violin is played pizzicato through a Synclavier with no overdubbing. An unexpected sound from Ponty that pays off exceptionally well.

Various other members of Ponty’s ensemble come and go on the other tracks. Only “Firmament” features the entire quintet, and this rich, complex work does benefit from the input of the other musicians. Bassist Guy Nsangué Akwa is present on seven tracks, contributing stylistic variety and a vital bottom end that suitably balances out Ponty’s high-range violin and keyboards. Akwa and percussionist Cissé round out the almost minimalist pulse of “Infinite Human Caravan”, with drummer Thierry Arpino and pianist William Lecomte adding more coloration on other tracks. “Love At Last Sight” is one of the most appealing tracks, low-key but uplifting in the manner of, say, a Vince Guaraldi tune.

By reviewing where he’s been musically successful before, and reshaping those elements into a more contemporary form, Ponty shows he’s up to the task of carrying the spirit of fusion into the new millennium instead of just mining the same old spent lodes. Though it was a while in coming, Life Enigma was worth every minute of the wait.

Two Thousand and One Years Ago; Signals From Planet Earth; The Infinite Human Caravan; Lonely Among All; Firmament; Pizzy Cat; Life Enigma; Even The Sun Will Die; Love At Last Sight; And Life Goes On.