By MIKE PERCIACCANTE
July 17, 2008
Sign in to view read count 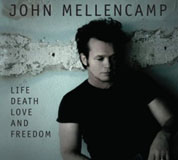 Packaged in an environmentally friendly cardboard sleeve, Mellencamp has called this his CD of "modern electric folksongs." Life, Death, Love & Freedom contains 14 tracks, most of which are about life, death and love—hence the title.

Bluesy, but in a different manner than 2003's superb Trouble No More (Columbia), Life Death Love & Freedom is very much Mellencamp writing and creating his own folk/country blues songs rather than covering classics by Robert Johnson, Willie Dixon, Son House, Memphis Minnie and even Hoagy Carmichael.

The best track is the very joyous, '50s-like and somewhat out of place "My Sweet Love." It contrasts with the simplicity and sparse tone of the other tracks which, from their sound, feel and texture, could have been written by Bob Dylan or Bruce Springsteen (in his Nebraska and/or Ghost of Tom Joad phases). "If I Die Sudden" is the track that most sounds like Mellencamp. Though it is almost gospel-like in its arrangement it is the fuzzy and distorted guitars that make it special.

"Longest Days" is a look at mortality and aging ("Death to me is just a mystery/I was just too busy raising up Cain/Nothing lasts forever"). For long-time fans, fear not, the heartland rocker still has a political bent, evidenced by "Jena," which is about the Jena Six Trial in Louisiana that centered around the six black teenagers charged with the beating of a white student at Jena High School. The sing-along song is an excellent example of Mellencamp's underappreciated songwriting.

Mellencamp's fans will enjoy this CD. However, if they are expecting "Jack And Diane" they won't find it here. This CD is a decidedly non-commercial affair. That's not to say that the songs are inaccessible, but that fans will be hard-pressed to find anything other than "My Sweet Love" garnering any kind of airplay.

In a perfect world, the disc would receive the attention it deserves. Life, Death, Love & Freedom is an excellent, thoughtful album featuring beautiful, insightful lyrics that look at life, the past and at time passing away. Though Mellencamp spends the majority of the CD reflecting upon his mortality and the fragile state of the country, it is still full of hope.

The collection is a two disc affair—one a standard CD and the other the first ever release in the xÏÄÅ (CODE) format, which is essentially a high quality audio DVD.