By DAN MCCLENAGHAN
December 29, 2010
Sign in to view read count 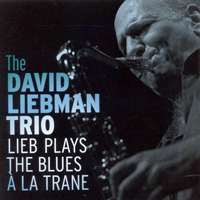 Saxophonist Dave Liebman's rise into the jazz big time came from his stint in Miles Davis' band in the early seventies, playing soprano sax on the iconic trumpeter's often maligned but groundbreaking and excellent On the Corner (Columbia Records, 1972). It didn't hurt, profile-wise, working with drummer Elvin Jones, on Live at the Lighthouse (Blue Note Records, 1972). And, of course, the name "Elvin Jones," in a "degree of separation" mode, brings up John Coltrane, whom Liebman describes, in his succinct and straightforward liner notes to Lieb Plays The Blues À La Trane, as a "titanic influence on my life and music."

It's not Liebman's first full CD foray into the Coltrane canon. He recorded Homage to Coltrane (Owl Records) in 1987; but Lieb Plays The Blues À La Trane, recorded live, is a more spontaneous, off-the-cuff affair. The playing of the legendary saxophonist's repertoire on this particular night, during a 2008 Belgian tour, was a spur-of-the-moment decision. The resulting music has a feeling of loose and limber spontaneity, with interludes of raucous, rough-edged fun.

The disc opens with Miles Davis' "All Blues," from the classic Kind of Blue (Columbia,1959). Liebman is on soprano here, and both he and his trio simmer, with his sax lines snaking around an insistent rhythm. The group veers frenetically from the familiar melody, flying free.

The Coltrane originals—"Up Against the Wall," "Mr. P.C." and "Village Blues" —centerpiece the set, the first featuring Liebman on tenor sax, sounding brawny and bold. The fifteen minute-plus "Village Blues" is more laidback and fluid.

Liebman closes out with "Take the Coltrane," a tune written by Duke Ellington for Duke Ellington & John Coltrane (Impulse!, 1963). Lieb roars into a searing sheets-of-sound mode, à la Coltrane, for a rousing wrap-up on this fine nod to an influential jazz artist.

All Blues; Up Against the Wall; Mr. P.C.; Village Blues; Take the Coltrane.