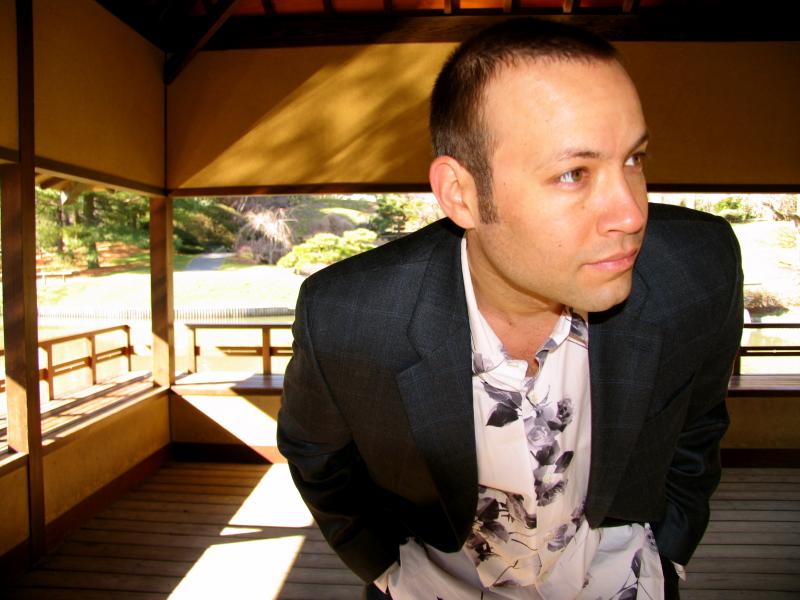 Liberty Ellman was short his pedals for this Moving On Music gig at Crescent Arts Centre—lost somewhere in transit—but he certainly wasn't short of musical ideas during a constantly engaging ninety-minute set. With four releases in twenty years Ellman maybe isn't the most prolific of leaders yet this only tells part of the story, for the New York-based guitarist—a cornerstone of Henry Threadgill's group these past fifteen years—is acknowledged as one of the most progressive of contemporary jazz guitarists. Surprisingly, perhaps, the set contained only two tracks from Radiate (PI Records, 2015)—Ellman's first release in nine years—while the music stands in front of long-standing band members Stephan Crump—whose bass had also failed to disembark in Belfast—and Damion Reid signalled new material being road tested. Clearly, as is commonplace with the most adventurous musicians, Ellman declines to rest long in the comfort zone.

It was with Andrew Hill's "Siete Ocho" that the trio announced itself, the driving rhythms underpinning Ellman's mazy bursts, interspersed with harmonically arresting chordal progressions. No less compelling were the sidemen. Reid's highly propulsive stickwork oscillated between light, skipping grooves and, at the other extreme, explosive and complex waves. Reid displayed great sense of adventure—he studied with Billy Higgins after all—whilst there was more than a little of Dennis Chambers's hybrid jazz-fusion/funk language. Crump's industry was matched by his musicality, his bass lines singing a tale both soulful and urgent—like a preacher on a roll.

Apart from a straight-ahead, tender reading of "I Wish I Knew"—with a beautiful solo intro from Ellman—and Charles Mingus' "Duke Ellington's Sound of Love," the rest of the set comprised Ellman originals old and new. The post-bop "Aestivation," from Ophiuchus Butterfly (Pi Recordings, 2006) pitched Ellman's scintillating soloing, as light and as brilliant as sparks flying off a fire, against Reid's tumultouos polyrhythms. Ellman's restless ruminations colored the early terrain of "Vibrograph," with its mid-song, Mahavishnu Orchestra-esque motif prompting greater purpose from the guitarist, who unrolled a bold mosaic of bright chords and darting runs, with Crump and Reid—on skittering brushes—responding imaginatively.

An immense, bustling drum solo signalled "April Sketch," Reid thereafter displaying equal measures of finesse and guile as he navigated one of Ellman's more expansive improvisations -a beguiling weave of tumbling glissandi, chordal stepping stones and teasing arpeggios. His advanced technique, however, never once lost the melodic thread -the interpretation of Mingus' aforementioned ode to Ellington was lyricism and elegance personified. A couple of new tunes, on the other hand, revelled in shifting time signatures and scurrying rhythms, with bassist and drummer paying close attention to the fairly complex charts before them while going about their business. If you closed your eyes though, the collective sound was one of unfettered freedom, which goes with the territory inhabited by three such expressive musicians.

"Enigmatic Runner" from Radiate and "Excavation" from Tactiles (PI Recordings, 2003) rounded out the set, the former a fascinating three-way dialogue with Ellman's sinewy solo morphing into a vamp beneath Reid's spectacular kit-acrobatics, the latter an odd-metered slow-burner of noirish design. The encore, "Opalescence" was a curiously hypnotic affair; the striking motif surfaced intermittently in the midst of Ellman's quietly melodious soloing—punctuated by more sparkling arpeggios—as Crump's searching bass lines and Reid's surging crescendos repeatedly threatened collective lift-off. The effect of the circuitous patterns was akin to watching a scene in a movie on repeat, only with the odd sensation of being viewed each time from a slightly different angle.

In one configuration or another Ellman, Crump and Reid have played together for fifteen years and the trust and familiarity in their conversational play—multi-layered yet flowing—was evident on the stage of the Crescent Arts Centre. The three musicians made the complex seem simple, the angular attractive. Ellman stands as one of the most distinctive guitarists of the last twenty years. Were it not for playing more constraining sideman roles so often during that time he would likely be talked about in the same vein as Kurt Rosenwinkel, that's to say, one of the defining figures on guitar of his generation.

Hopefully, the next Ellman CD will spur this brilliant musician/composer to spend more time in the spotlight as chief protagonist.