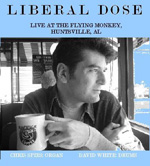 A polymath is a person of great and varied learning. The German writer Goethe was a polymath; his IQ has been estimated at 210, which would have been the highest ever recorded.

Fred Steven "Skip Heller is also a polymath. Musically omnivorous and pan-culturally aware, Skip Heller speaks with equal authority and enthusiasm on subjects as disparate as all of American music, baseball, women's professional basketball, culture, politics, poetics... just whatever catches his fancy and convinces him to immerse himself. To simply say that Heller is an interesting fellow is to horribly minimize his importance. Those words do not begin to describe his tremendous musical intellect.

Heller has recently released his most satisfying collection to date. Liberal Dose captures a collection of all-original material live in Huntsville, Alabama with a local rhythm section. This is fantastic because of how well the group gels with what ostensibly ought to be little available practice time. However, that's what jazz has always been about: music professionals at the top of their form coming together and practicing their craft seamlessly.

Liberal Dose contains original compositions and arrangements that all tell a story. "Meydele (Dorem Khosene) was a wedding march commissioned of Heller that "mutated into a Mickey Katz-arranges-Hebraic-melodies -for-Grant Green -and-Big- John-Patton juggernaut that begins plaintively, transforming into a molten funk-fest that concludes with a quotation from Stevie Wonder's "Sir Duke. Heller solos amply and allows Chris Spies the same favor, adding tasty comps behind the organist.

Dave Alvin, written for Heller's colleague and mentor, the leader of the Blasters, is a Muscle Shoals delight, full of the soul and want of the best that Aretha, Otis, and Wilson had to offer. "(The Lonesome Death of) Emily Remler pays plaintive tribute to that late jazz artist in a starkly naked way. On the final two cuts, "McMansion on the Hill and "President "Guitar Watson, Heller unleashes all of his creative pathos, delivering highly charged performances with a political edge. Liberal Dose is the best I have heard by the enigmatic Heller so far, but doubtless there will be more. This polymath simply cannot contain himself.