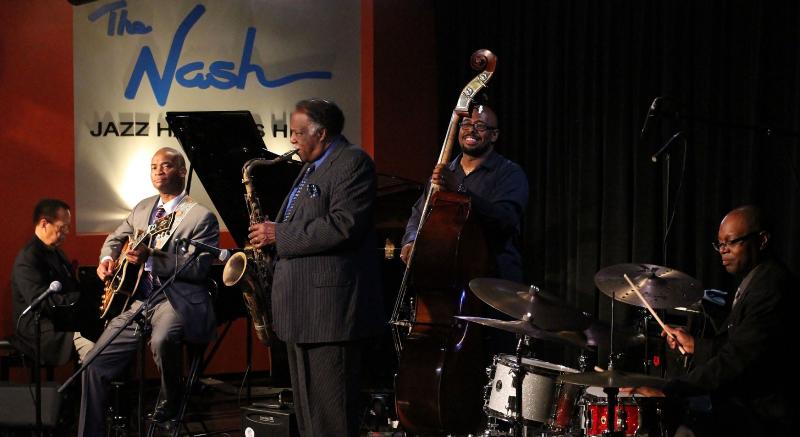 Drummer Lewis Nash led a quintet of New York-based musicians in two concerts to mark the grand opening of The Nash, a new jazz educational and performance center in Phoenix, Arizona, operated by Jazz in Arizona Inc. and named for the city's native son, who has become internationally renowned.

Nash's all-star combo featured Cedar Walton on piano, Houston Person on tenor sax, Russell Malone on guitar and Christian McBride on bass. Each of the 75-minute concerts filled the 120-seat venue. The early performance launched with a swinging blues that saluted Nash's first introduction by his parents to the sounds of Muddy Waters, Howlin' Wolf, Lightnin' Hopkins and B.B. King.

Nash chose a set list that featured each musician in turn. Walton, known for his work in both hard-bop and ballad genres, exhibited his diverse style on "Body and Soul," performed by the trio without the usual presence of a horn. Walton imbued the chart with flowing progressions, injecting multiple quotes that caused smiles and nods from hip listeners who recognized snips of "Golden Earrings," "I Get a Kick Out of You," "Mona Lisa" and "My Darling My Darling."

The quintet's exploration of Walton's "The Holy Land" was delivered in a hard-swinging style that was sparked by intense solos from Malone and McBride. Person's soulful tenor and Malone's fierce guitar riffs conveyed Percy Mayfield's melancholic spirit of "Please Send Me Someone to Love," as Nash propelled via precise use of the ride cymbal, snare and bass drum.

Throughout, Nash commanded his drum set with poise and assurance, inventively contrasting bright snare and cymbal work with the injection of toms. His innovative and elegant brush moves delighted for its inventive flair of time and sound. At one point, he put aside his hand-hard tools to play with fingers and palms for a stylish interlude. He also offered a witty vocal scat segment that elicited a wave of chuckles.

The Nash family was strongly present for the first concert, including his parents, Willie Mae and Walter Nash; his siblings; and his 99 year-old maternal grandmother, Nancy Young.

The double-header evening was preceded the previous night by a performance in the central Phoenix residence of Herb and Lorene Ely, major benefactors of Jazz in Arizona. The statewide non-profit jazz-support organization, established in 1977, has leased two storefront suites in the Roosevelt Arts District of central Phoenix.

Nash attended local elementary and high schools, and attended Arizona State University until he was hired in 1981 at the age of 22 by singer Betty Carter in New York. After four years of international tours with her, Nash performed with most of the jazz world's luminaries, from pianist Oscar Peterson and saxophonist Sonny Rollins to trumpeter Dizzy Gillespie and saxophonist Stan Getz, as well as 10 years with pianist Tommy Flanagan's trio.