By IAN PATTERSON
September 29, 2010
Sign in to view read count 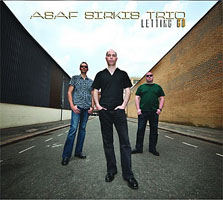 The quiet evolution of drummer Asaf Sirkis as a composer has been fascinating to behold and almost as beguiling as his playing. The confluence of influences that give shape to his rhythms—Middle Eastern, Indian and jazz—combined with a love of Sun Ra's music and an interest in astronomy, results in music which is difficult to pin down, yet which is undeniably hypnotic, in a slightly dark and brooding manner. Where Letting Go differs fromThe Monk (SAM, 2008) is in the slightly sunnier visage the music presents.

The opener, "Chennai Dream,"—with Yaron Stavi's tuneful bass at the fore—is a million light years from the dark undertones of Sirkis' Inner Noise project or The Monk. Imagine Bill Frisell going to India and you may begin to get an idea of the lovely, country-like twang that guitarist Tassos Spiliotopoulos brings to this breezy tune. Indeed, there's a passing resemblance to drummer Ginger Baker's '90s trio—which recorded two albums with Frisell and bassist Charlie Haden. Sirkis' drumming on this track is particularly captivating, and his punchy rolls, spitting cymbals, unpredictable flourishes and subtle accents hold the ear prisoner for the forty-five thrilling seconds his solo lasts.

The title track shifts from dreamy, ECM-like reverie to an accelerated rock- inspired passage, where Spiliotopoulos takes a charging, sinewy solo over Sirkis' driving drums and pulsing bass. The Greek-born guitarist dominates this track and "Full Moon," where his solo develops gradually and potently, bookended by a delightfully simple motif based around guitar chords left hanging in the air. One of the features of Sirkis' writing is his selflessness, and bassist Stavi is also given plenty of space to let go, especially on the lyrical "Waltz for Rehovot"—a nostalgic homage to Sirkis' birthplace in Israel—where he improvises seductively around the pretty melody for nearly the composition's entire five-and-a-half minutes.

There's a ruminative, dream-like feel to the tone poems "Lady of the Lake," "Other Stars and Planets" and "IMA"—something which seems to be part of Sirkis' musical DNA. On the latter two, harmonicist Patrick Bettison injects verve and bluesy melancholy, his extended interventions bringing an added dimension to the music in much the way Gary Husband's piano and Adriano Adewale's percussion added significant colors to The Monk. Bettison and Sirkis are well-known to each other through their work in guitarist Nicolas Meier's group, and there's an obvious chemistry at work, also given that Sirkis' trio has been together now for four years.

Perhaps leaving Gilad Atzmon's Orient House Ensemble has had a liberating effect on the London-based Israeli drummer. Whatever the case, Sirkis continues to grow as a composer and leader, balancing subtly alluring introspection with dramatic release. This record will add to his reputation as an original and captivating voice.