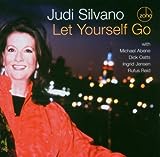 Singer Judi Silvano (aka Mrs. Joe Lovano) has a real winner in this release. Having only heard her on several albums with Joe Lovano in which she was singing vocalese, or on her own Songs I Wrote or Wished I Did in '00, I was totally unprepared for my first listening of this new venture. The album was conceived as tribute to Silvano's mother on her 80th birthday, who assisted in selecting the eleven standards performed here. Silvano has accrued quite a reputation as a cutting-edge singer working in duet or small combos with such artists as Mal Waldron, Joe Lovano and others. This is admittedly her most mainstream album.

The album opens with a jumping arrangement of the Irving Berlin title tune and lets the listener know immediately that both vocalist and musicians are swinging. "Let's Fall In Love" begins, a la the Frank Sinatra/Johnny Mandel arrangement from '60, with a portion of the bridge sung in ballad tempo. Ingrid Jensen's muted trumpet peeks out from under the corners. Silvano does a lot with verses throughout the album. Most of them add new flavor to the already familiar lyrics, and the singer creatively places the verse in mid-song on "I Only Have Eyes For You" and "If I Could Write A Book," adding a dramatic rush to both ballad and up-tempo performances. On the latter, Silvano channels a toe-tapping delivery and one knows that they're in familiar territory (e.g. Sinatra's version from the Pal Joey soundtrack).

The album also consists of finely tuned arrangements by Michael Abene and an assembled cast of stellar musicians that all get a chance to shine: Dick Oatts on alto sax, Dan Silverman on trombone, Jamie Baum on alto flute, Rufus Reid on bass, Akua Dixon on cello. Silvano scats on two selections, adding to the flavor. Two unusual treatments of "Our Love Is Here to Stay" (as a cha-cha) and "Every Time We Say Goodbye" (with a Latin patina) close out the session.

This one's a keeper!

Let Yourself Go; Let's Fall In Love; Why Do I Love You?; I'm In The Mood For Love; I Only Have Eyes For You; When I Fall In Love; I Could Write A Book; I Love Paris; Our Love Is Here To Stay; Goodbye; Everytime We Say Goodbye