Eric Ineke: Let There Be Life, Love and Laughter 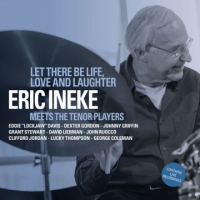 Eric Ineke is a long time drummer, residing in the Netherlands, who is one of a coterie of sidemen favored by American expatriate jazz musicians for their European gigs. This fine compilation of his work with nine of the great tenor saxophonists gives the listener a golden opportunity to listen to some of their best workouts and compare their styles and approaches.

The recording dates cover almost a half century from 1968 (Lucky Thompson) to 2014 (Dave Liebman and John Ruocco). The genres are bebop, hard bop, and everything in between, with only the slightest hints of John Coltrane and the avant-garde that had already made their impact in the 1960s. This conservative platform makes the music supremely pleasurable listening, but perhaps at the sacrifice of experimentation and novelty. The sound on all tracks is transparent and has the comfortable feel of analog and vinyl recordings which many aficianados prefer to the strictly digital format..

The album begins with the standard, "Body and Soul," featuring Eddie "Lockjaw" Davis in a 1984 recording made late in his career. Beautifully expressive, Davis could almost be mistaken for Ben Webster. Beginning with an extended cadenza, Davis has lots of room to introspect his improvisations, weaving around the tune in a conversational way. His playing is sheer poetry.

On Benny Golson's "Stablemates" (live, 1972), we find a relaxed Dexter Gordon translating the Golson tune into his own language. However, towards the end, Gordon loosens up and goes a little crazy, then regains his composure, and then there is a little bit of Coltrane thrown in. This is a rare recording where Gordon tries to redefine himself a bit. Gordon resided in Denmark at the time, to return in a few years to New York for his famous homecoming at the Village Vanguard.

On Denzil Best's tune "Wee," recorded live in 1990, Johnny Griffin shows, as always, that he can cut anybody who would dare to duel with him, letting loose with superfast improvising in the tradition of bebop legends Sonny Stitt and Frank Morgan. Griffin definitely gets the nod for top virtuoso playing on the album.

Recorded live at the famous Bimhuis club in Amsterdam in 2013, Grant Stewart's rendition of "Bye Bye Blackbird" reminds one of Golson's swinging yet brilliantly intellectual approach. Rob van Pavel executes a fine piano solo in the manner of Oscar Peterson, and some lively swinging drum work by Ineke furthers the comparison to the ways in which Peterson's trio accompanied vocalists and instrumentalists. There appears to be a second saxophonist on this recording not mentioned in the track listing— or was it overdubbed by Stewart?

A Kurt Weill tune "Let There be Life, Love and Laughter," which sounds like a contrafact of "Almost Like Being in Love," was recorded in 2014 by Dave Liebman and John Ruocco, a lesser known expat who today resides and teaches at the Conservatory in the Netherlands. Although the large number of choruses gives the saxophonists ample opportunity to work the tune in multiple ways, Liebman, unusually reserved, doesn't seem to want to go out on a limb. But the track finishes up with an energetic trading fours between the saxophones and drums that lends some excitement.

"Prayer to the People" is a beautiful ballad composed by Clifford Jordan, who is also the saxophonist on this 1983 record date. Jordan has the most exquisite tone quality of any of the saxophonists on this recording. The influence of Stan Getz is readily apparent, and a carefully woven piano solo by Rein de Graaff with a Wynton Kelly influence adds to the laid back sweetness of the exposition.

In the chronologically earliest (1968) track on the album, the great but ill-fated Lucky Thompson (after a stellar career, he ended his life homeless in Seattle) works wonders with Tadd Dameron's "Lady Bird." Like Dameron, Thompson was an important part of the transition from swing to bebop. Strongly influenced by Don Byas and Coleman Hawkins, Thompson contributed to bebop's harmonic developments. This track has the exciting feeling of an authentic bebop session.

Finally, the great and perhaps historically under-rated George Coleman is at his lively best on Miles Davis' "Walkin.'" (The tune is attributed to Richard Carpenter, but the story is that Davis wrote it and, for some reason, gave the royalty rights to Carpenter. Some tunes on Davis' recordings notoriously have questionable composer credits.) Beefing up the "walkin'" blues feeling appropriate to the tune, the rhythm section pushes Coleman to seriously powerful output. His playing here is somewhat different from his important stint in the Miles Davis Quintet, which was naturally of a "cooler" texture. Heavy cymbals work by Ineke enhances the pressure cooker effect.

This album serves as a tribute to the exceptional European rhythm sections who did yeoman's work supporting the American expats who found greater acceptance on the Continent than in their home country. But the three-ring prize goes to these legendary saxophonists who have always brought great satisfaction to the ears of anyone who listens to them. In jazz. so much of the music is an expression of the player's individuality, and this album affords ample comparative demonstration of that fact.