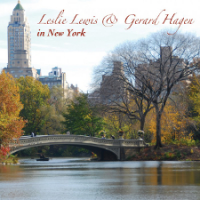 Vocalist Leslie Lewis' previous recording, Midnight Sun (Self Produced, 2012), revealed a a thoughtful and well-managed talent able to imbue her music with a dark pathos. Not dark in any negative sense of the word, but rich and romantic. Her followup, Leslie Lewis & Gerard Hagen in New York, made with her husband/pianist, distills Lewis' talent to the intimate duet level, concentrating the music to a point where much is revealed.

"Like Someone In Love" is introduced with Lewis singing a cappella through two choruses before Gerard Hagen bounces in, telepathically in tempo. Lewis takes on the Joe Jackson-penned lyrics to Duke Ellington's "Solitude," singing at a slow but determined pace, raising the ballad to gospel proportions. The more recent "Killing Me Softly" is the lengthiest piece on the recording, chiming in at seven-plus minutes. Lewis and Hagen again heart-meld into a warm simpatico that is delivered completely intact in an impressionistic fashion.

"Body and Soul" should be required listening to understand what the hubbub was all about when Coleman Hawkins transformed the song into a progenitor of bebop so long ago. That is the charm of straight vocal performance: it serves as a reminder of what the composers originally intended before jazz acolytes transformed that intention in so many wonderful ways. There is always a beginning and Leslie Lewis stands firmly on that spot when she sings.

Like Someone In Love; Gentle is My Love; Solitude; I Want to be Happy; Killing Me Softly; You Must Believe in Spring; I’ll Remember April; When I Fall In Love; Body and Soul.