By GLENN ASTARITA
December 19, 2018
Sign in to view read count 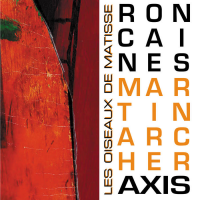 The founder of this UK-based label, reedman/multi-instrumentalist Martin Archer and many of his longtime or more recent cohorts radiate a seemingly eternal sphere of invention. Other than ongoing projects with specific artists or ensembles, no two albums are distinctly alike. Hence, the element of surprise is a recurring element. Here, Archer and saxophonist Ron Caines co-lead the septet for a multidimensional jazz-tinged bash amid colorific textures, pulsating free-form sprees, quaint oddities and other captivating attributes throughout the 77-minute runtime.

Of particular note is that Caines was the protagonist behind the legendary 1970s British progressive jazz, jazz rock and psychedelic band, East of Eden. Since then, Caines has not recorded much, yet as they say, it's better late than never. He's a talented performer who launches the presentation with spirited improvisational tactics and intricately rendered gusts during the pensive duet with pianist Laura Cole's somber undertones on the opening track, "Haptic Space #1. But the inward-looking ballad format does not reappear until the final piece "Haptic Space #2," which is another duet with the pianist. In between the subdued intro and outro, the acoustic-electric monster is unleashed.

The album moves forward with an underlying sense of adventure, sort of like a movie soundtrack, perhaps an avant-garde flick. But with enough experimentation to offset the ultra-modern jazz passages, the band will mimic the sounds of nature, delve into oddball scenarios and create a tiered music space or kick out the jams with intense and up-tempo free-zone dialogues. Moreover, Hervé Perez' judicious live sound processing methods intersperse an opaque layer into the velvety or boisterous parts where Archer and Caines rev up the engines with stimulating interchanges, and when violinist Graham Clark intersects or streams melody lines across the extensive musical plane.

"Nymphzuruck" sounds like a classic 70s prog rock vibe due to a hummable theme, thrusted with the frontline's deterministic unison choruses, outlined with Clark's sizzling violin lines. At times this piece sparks imagery of a loosely organized protest march, but eventually takes on a spacious aesthetic due to Caine's fluid and wistful soprano sax solo amid drifting qualities and Cole's dreamy electric piano voicings. The plot takes a U-turn on "Triangulation," which is a duel sax and drums improv with furious call and response movements and highly conversational exchanges above Johnny Hunter's feisty drumming.

Remaining tracks feature alternating cadences; a little rough-housing, lyrically resplendent choruses and swelling soundscapes. Among many other positives, Archer and Caines are a formidable team. Whereas, many kudos are in order for the compassionate band-members who balance their eminent technical aptitudes with complementary support, and a degree of fellowship that is conspicuously evident throughout.