By ROBERT SPENCER
October 1, 1999
Sign in to view read count 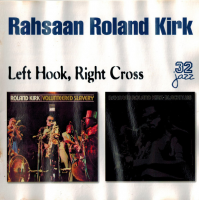 In the rollicking circus that is the music of Rahsaan Roland Kirk, some of his forays too slavishly imitate the shallow funk grooves of his latter days, while on others, he lets his muse roam more freely, and comes up with more than a few gems on Volunteered Slavery. Of course, there is a kitschy take of as-yet Little Stevie Wonder's Sixties hit "My Cherie Amour" and - is it Dionne Warwick's? - "I Say a Little Prayer." And the chorus on "Spirits Up Above" and "Search for the Reason Why" sound like outtakes from Jesus Christ Superstar. Without such half-serious pop fluff it wouldn't be Kirk. But this disc, disc one of yet another superb 32 Jazz reissue, Left Hook, Right Cross, contains a great deal of great, imaginative, histrionic, dramatic playing: pure Kirk.

The title track is Mingusian in its field holler glory. The instrumental smorgasbord shows up on the incredible beboppish "One Ton," alas, only for five minutes. Best of all is "A Tribute to John Coltrane," on which Kirk proves that he needed concede nothing in virtuosity, passion, fire, and imagination to the departed great one. He even reproduces the nasal tone of Trane's metal soprano mouthpiece, on something that ain't a soprano - manzello? Stritch? Whatever, it's first rate Kirk.

Blacknuss, the other disc of this collection, raises the question of the pop material more strongly, as it contains "Ain't No Sunshine," "What's Going On," "Mercy Mercy Me," "My Girl," "Never Can Say Goodbye," and others. Of course, they're not taken straight; they're Rahsaanized. He sings through his flute on "Ain't No Sunshine," screams through a horn (stritch?) on "What's Going On," and in general, invests these slim tunes with his expansive and encompassing sensibility. Yet the background on the first of these tunes is kitschy strings, and the second it's kitschy synthesized funk. Rahsaan's playing easily transcends such feeble support, but when he's quiet for even a moment, not much is left. One is left wishing for more originals.

So it's a mixed bag. There's a good deal of him on both of these discs, and when he plays he's in particularly magnificent form. You shouldn't miss this one, for even subpar Kirk is more alive than most are today.