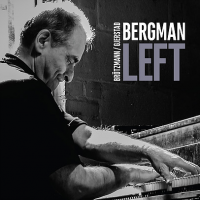 Left brings together a particularly uncompromising triumvirate of veterans in pianist Borah Bergman (who died in 2012), German saxophone icon Peter Brötzmann and Norwegian reedman Frode Gjerstad. Although all three recorded after this date in various combinations, this performance from the 1996 Molde International Jazz Festival was the threesome's first and only appearance together on disc. Gjerstad unearthed the tape while seeking an overview of old recordings and was struck by Bergman's contribution and especially his shining left hand, hence the titles.

While the twin reeds could be better separated in the stereo picture, they are easily distinguished by their respective styles for much of the time. Brötzmann's inimitable clarion call initiates proceedings, and thereafter his stentorian bellow erupts at intervals throughout. Gjerstad's yelping alto saxophone and bubbling clarinet provide a keen contrast, but when the passion increases he often focuses on the altissimo register. Bergman comes through loud and clear and is the dominant voice for much of the 55-minute program. Given the participants back stories there is as much fire-breathing wailing as you might expect, but those episodes are balanced by a fair few more open passages which encroach on the outer limits of melodicism.

Bergman's virtuosity can be overwhelming. At times it sounds as if there are two occupants of the piano stool, such is the degree of independence he marshals between his hands, each emitting torrential streams of crisply articulated evenly spaced notes. But it's also Bergman who supplies some of the more tuneful moments. And it's he who most often determines the dynamic. A good example of both arrives partway through the opening "Left Hand," where after a phase of red-lining intensity, the pianist's repeatedly hammered tremolos usher in an unaccompanied sequence of blues-tinged sonorities, to cool fevered brows.

The two reedmen can also take a lyrical turn, most notably at the start of "Left Out." But their gentle intertwining leads to more fractious fare, as leaping upper register screams interrupt the breathy susurrations and keypad rattling. Bergman doesn't join until 11-minutes in, but then in an illustration of the on-the fly structuring of such experienced practitioners, the horns drop out to leave him alone in the spotlight. Thereafter periods of reflection become fewer as the trio winds up for a cathartic conclusion. It's a welcome reminder of the pianist's virtues, and that there has been no-one comparable since.

Left Hand; Left Us; Left Out.