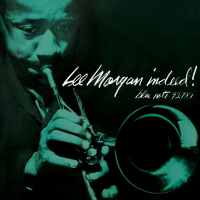 The first time Lee Morgan entered a recording studio, he was just 18 years old and he was leading his own band. More impressive, that band included soon-to-be-legendary pianist Horace Silver and drummer Philly Joe Jones.

This is the CD of that 1956 recording session. While the players were great, the music is merely ordinary—which isn't too surprising given the tender age of the leader. Indeed! is standard Blue Note hard bop by the guys who would, in various combinations, become the label's mainstays.

That's not a knock. This is a good record, and if you're a fan of hard bop, as I am, you'll like it. Morgan is very much the product of Dizzy Gillespie and Fats Navarro. He sounds a bit like both, and he even played Dizzy's trademark horn with a bent bell.

ADVERTISEMENT
The other horn player is a virtual unknown—saxman Clarence Sharpe, known to friends as C. Sharpe, or C#. In many numbers, he sounds like a Charlie Parker knockoff—again, no big surprise for a young alto player in 1956, a year after Bird's death. In Sharpe's 1990 obituary, The New York Times called him "the missing link between Charlie Parker and Ornette Coleman." But that was later in life. Here, he's all bebop.

Same with Lee Morgan, who had a long and legendary career on Blue Note, recording something like 25 albums. This is the first, and it's no fault of the young 18-year-old that it's not yet as memorable as 1963's The Sidewinder. It's solid, enjoyable, if unoriginal, hard bop.

A couple of side notes: First, though the album has only one ballad, "The Lady," it is sweet and tender and nearly all Morgan. A real standout. Second, the cut "Gaza Strip" has absolutely no hints of Middle Eastern or Arabic influences. Wonder where the title came from. Finally, though Horace Silver is a member of the band, he mostly stays in the background, taking a handful of perfunctory solos.

All in all, a solid freshman outing, offering the promise of even better things to come.