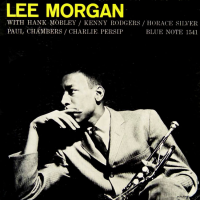 No one ever bought a record for its weird song titles. (And if they did, Iron Butterfly's psychedelic rock classic In-A-Gadda-Da-Vida would be the best seller of all time.) But still, Lee Morgan Volume 2: Sextet deserves some kind of award in that category.

First, there are two songs written by virtual unknown Owen Marshall. "Her Sister" makes you wonder two things: Whose sister? And what is she like? Sexy? Mysterious? Cool? Hard to tell from this tune, which is none of the above, but just a plain old vanilla upbeat hard bop number. Nice, but nothing special. No one you'd write a song for, anyway.

And then there's the tune "D's Fink." Say what? It's actually a terrific piece—possibly the best on this six-song album—full of nice unison playing and interesting solos. But... "D's Fink"? Who or what is that?

(One place you won't find out is in a tribute to Owen Marshall published in the Philadelphia Daily News in 1998, four years after his death. Not a mention of either song. Alas.)

And there's a song called "Latin Hangover," which would be an excellent title for a tune with, say, Latin rhythms. Except that this song doesn't have any. It also isn't Afro-Cuban jazz, or a samba, or a bassa nova, and there is no instrumentation beyond the usual bop stuff —trumpet, alto, tenor, piano, bass, drums. So "Latin Hangover"? Not hardly. A very lucky thing that record labels are rarely sued for false advertising.

So what is Lee Morgan Volume 2? Absolutely straight-up standard hard bop by a bandleader who was all of 18 when he recorded it in 1956.

Again, like Morgan's freshman recording, Volume 2 is a perfectly fine, even better-than-average Blue Note bop album, but nothing you'd run out and tell your friends about. The biggest selling points are four songs written by Benny Golson, who does not play in this band, including the debut of "Whisper Not." In fact, the unison playing and tunesmithing are about the best parts of Volume 2. The solos, even by legendary pianist Horace Silver, are nice but not memorable.

One somewhat interesting note is the introduction of alto saxman Kenny Rodgers, which would be something worth exploring, if his playing was interesting or different. It's not, and Rodgers hardly ever appeared on record again. So there's that.

I know, that's damning with faint praise. I'm sorry. Lee Morgan Volume 2 is a fine record, and if you're a Lee Morgan completest, you probably own it. For the rest of us, it's enough to know it exists, to enjoy it once in a great while, and let it go at that.