Lee Konitz: What True Improvising Is

view slideshow
By BOB KENSELAAR
November 7, 2012
Sign in to view read count
Lee Konitz is legendary as one of the great individualists in jazz, an art form that has always placed an extraordinary high value on individualism and unique forms of expression. "I've pretty much dedicated myself to trying to figure out what true improvising is," he says, "as opposed to playing what you know and getting loose with it. I probably have a bit of a unique place in being able to fool around with famous tunes the way I do."

Konitz's focus on standards common to the jazz repertoire continues on the 2012 recording that features him prominently in a leaderless quartet dubbed Enfants Terribles, Live at the Blue Note (Half Note), along with collaborators Bill Frisell on guitar, Gary Peacock on bass, and Joey Baron on drums.

Born in 1927, Konitz was a slightly junior contemporary of Charlie Parker-seven years younger-and one of very few alto saxophonists who came up in the late 1940s and early '50s who avoided imitating Parker. Instead, he presented a distinctive voice of his own. Konitz appeared on some widely heralded landmark recordings very early in his career, Miles Davis's Birth of the Cool sessions in 1949 and 1950 (reissued on Blue Note, 2001) and Lennie Tristano's 1949 session cited as the first example of free jazz-completely improvised, with no prearranged melody, harmony, or rhythm-reissued on Intuition (Blue Note, 1996). Konitz also counts his work with saxophonist Warne Marsh as very important in his early career. Despite his penchant for standards, Konitz has composed original tunes throughout his career. Especially notable examples appear on his first recording as a leader, Subconscious-Lee (Prestige, 1949). In the six decades since that first outing, he has recorded well over a hundred recordings under his own name.

Konitz recalls that it was Jeff Levenson of Half Note records who put the Enfants Terribles ensemble together. "It was actually supposed to be 'Les Enfants Terribles.' They forgot the 'Les.' It wasn't my title, anyway. I just say, 'OK, what the hell.' You've got to call it something, so, that's good enough." The recording at the Blue Note in New York City in June 2011 captured their first performance together, and the four musicians reprised their performance about a year later in the same venue, in August 2012. "I enjoyed playing with that band quite a lot. We never played together after that first date, and I was looking forward to it. When it happened, I enjoyed it. I didn't feel we advanced much the way we could have if we played a tour together, but I enjoyed it."

On their live recording and at their return to the Blue Note, Enfants Terribles performed standards nearly exclusively, although the band took a very free approach to each selection. Theirs was never a straight reading of the melody by a lead voice, followed by two or three choruses of improvisation by each member in turn, finished off with a crisp, closing melody statement. Instead, they emphasized improvisation from the start, using the standards' harmonic structure as a general point of reference-or point of departure-only touching ona few bars of the original melodies here and there. 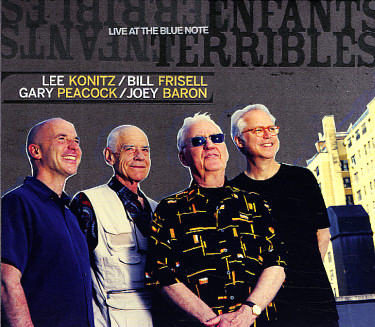 "It's taken me a long time to kind of realize that I'm not playing for the audience, so to speak," says Konitz. "I never think of it that way. But in a sense, I do enjoy playing the melody. Why not play it every once in a while, uninhibitedly? I've never been against playing a melody." The CD does include one small exception to this overall approach on the opener, Cole Porter's "What Is This Thing Called Love." Here, the ensemble plays freely throughout until the out chorus, where Konitz and Frisell showcase the saxophonist's original composition, "Subconscious-Lee," which is based on the Porter tune.

"I'm not trying to hide the basic structure of the tune," says Konitz. "I'm never trying to do that. But, of course, you know that this has been a technique a good many years, with Charlie Parker and everybody writing variations on tunes, Miles Davis with 'Donna Lee' based on "Indiana.'"

Bill Frisell contributed a strong voice in Enfants Terribles, according to Konitz. "He's irreplaceable, I think. His sound, his interest in what's going, and the way he includes himself are unparalleled. I can't imagine that happening with another guitar player offhand. Maybe John Abercrombie, but I haven't played with him that much at all. He was very special. Billy Bauer was the first guitarist I had a chance to play with, and he was very responsive, I think, also. The guitar is a lot different than the piano. Fewer notes and less activity, and you just get a lovely sound."

Konitz gives high marks to the other members of the ensemble, as well. "Gary Peacock is very special. He seems to go in a different direction sometimes, but as I listen to him playing more and more, I see what he's doing clearly." Joey Baron provided a contrast to another notable drummer who has collaborated with Konitz, Paul Motian-his last recording before his death in 2011 was a live date led by the saxophonist at Birdland-Lee Konitz/ Brad Mehldau/Charlie Haden/Paul Motian, Live at Birdland (ECM, 2011). "They're both very responsive players, and I enjoyed both of them for different reasons. Sometimes Paul didn't really insert himself very much-he played nicely in the background. Sometimes I wished he would stir up a little bit of propulsion, which Joey can do nicely. But Paul was great, and Joey's great, too, and that's the bottom line."

ADVERTISEMENT
Another recent collaborator gets some deserving praise from Konitz. "I've been playing with a pianist in different contexts named Dan Tepfer, who is fun to play with." The two recorded together on Duos with Lee (Sunnyside, 2009). "We've also done some quartet things that were really nice, some concerts with a nice group. Very free music on standards again." Tepfer, who was 30 years old at the time of the Sunnyside recording, is one among many young musicians whom Konitz has played with in recent years. "Sometimes I get inspired by the young people, their energy, and their interest in what I'm trying to do and things like that. Most of the recordings I've made with the younger guys-there's always something nice I can say. I enjoy listening to my situations at times, and the best ones are with the best players, of course. . . . Some New Stuff (DIW, 2001) is another nice record-a trio record I made with Joey Baron and a great bassist who plays with Woody Allen sometimes, Greg Cohen."

Much of Konitz's work over the years is marked by a great deal of freedom in his improvisation, but he nearly always gravitates toward standards and familiar chord changes, and he considers his approach as very different from the experiments in free improvisation that he did early in his career with Lennie Tristano. "I just enjoy playing on a familiar structure, a good chord progression, and a fine tune. Playing totally free-on the Tristano thing-it almost sounds like classical music. It doesn't really get into a tempo or anything like that. I like that sometimes, like starting out a set that way, something spontaneous, but that'll lead to someone playing the melody and we'll go there. And I prefer to get into swing at some point. What Tristano did earlier-his so-called free jazz-sounded like there were no specific chord changes, but usually had some kind of tonality. One time he was trying to explain that to me on an airplane. I said, wait until we get on the ground. Too abstract for me."

A recording yet to be released as of this writing puts Konitz out in front of the WDR Big Band, the outstanding ensemble based in Cologne, Germany. "It's a recording of arrangements of my tunes and Tristano's work by the fine arranger Michael Abene, who's working with the band this season. And some very nice things have come of it. I've been living in Cologne with my wife, who's German herself, for a number of years now. And the band hadn't really ever asked me to do much with them before. I talked to the director, Lucas Schmid, and he went for the idea of not only me playing with the big band, but to also bring my own rhythm section that I was playing with at the time, the German pianist Florian Weber and [bassist] Jeff Denson and [drummer] Ziv Ravitz. But it ended up just Florian did it with me. The rhythm section of the big band, the bass and drummer were fine, and they knew the band and everything, so it turned out maybe better than if I had an exclusive quartet. Florian and I worked very effectively there, I think, so that worked out well. And on one tune, based on 'Strike Up the Band,' I'm actually playing a straight melody all by myself, no accompaniment at all. The recording isn't scheduled to come out at the moment. Lucas Schmid said that he hasn't connected with anybody yet about it, so, it may just be a private recording. I did another recording with the Metropole Orchestra out in Holland. Bill Holman wrote a piece for me on that, which is beautiful, but it wasn't ever released. So I had a hundred copies printed up and just gave them to my friends."

A couple of recordings from the 1960s that many regard as classics come to mind in light of Konitz's recent work, partly due to their instrumentation and partly due to their overall approach to improvisation: The Lee Konitz Duets (Milestone, 1968), featuring a host of guest artists, and Motion (Verve, 1961), with bassist Sonny Dallas and drummer Elvin Jones. Konitz recalls both vividly. On Duets, he says, "We just got together on that date, and every half hour someone was supposed to report for the next duet. We finished the day a half hour early as I recall. One of the final pieces was a little riff that Marshall Brown had suggested, and we played pretty freely on that. Some chord structures also, standard chord structures. I enjoyed that record a lot." With Motion, "No chordal instruments made it a very special situation," says Konitz, "and because it was just me and bass and drums, I let myself go. I felt like playing longer solos. Also, you'd have to be a complete idiot to not be able to swing with Elvin Jones. So, in spite of myself I swung a little bit."

When asked about his standing in jazz as something of an elder statesman, Konitz points again to his dedication to what he refers to as "true improvising"-staying far way from "getting trapped in a stylistic thing of having to play the same licks over and over." But he summarizes his place in jazz overall with a remarkably simple statement: "All I can honestly tell you is I appreciate being included in this family."