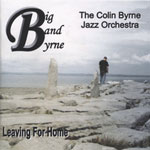 Leaving for Home is the bold and brash big band debut from the new Big Band Byrne, Colin Byrne's jazz orchestra from Leeds, United Kingdom. In February 2005 the composer/drummer went on the internet and advertised on Jazz in Leeds to attract musicians interested in playing original music in a new band. The result was the birth of the seventeen-piece Big Band Byrne, which rumbles through original contemporary charts reminiscent of the Ellington and Mingus bands of the past. This album captures a June, 2005 live recording at the Brudenell Social Club in Leeds, where the sounds of cheers and approval from the crowd lent a special atmosphere to the session.

Don't be deceived by the fact that there are only seven tunes on the set, because they stretch out to an hour and a quarter. Byrne's charts provide a wide range of tempo changes and plenty of solo space for members of the band. Dedicated to his Wild Monday nights with a former love, "Crazy Monday" begins this set with almost twenty minutes of heat, with sparks from players on baritone and trombone, plus the entire rhythm section.

There are sensational solo performances by tenorist Tony Burkill and trumpeter James Hamilton on one of the best scores here, "Talking." Byrne has composed an exciting big band number, engulfed in brass and diced with a passion-filled solo shot by tenor player Rob Mitchell, in the outstanding "1916," written in memory of the Easter revolt in Dublin, Ireland that marked the formation of the Republic of Ireland. (Byrne was born in Cork City, Ireland.)

The title piece, "Leaving For Home," is a powerful, pounding tune with a head-bopping rhythm and scorching solos that bring out the best of the band. Byrne offers a complex and challenging arrangement on "Time To Remind Me," which, as he states in the liner notes, is an "attempt in modal composition." Rounding out the concert are "As If Only," featuring Burkill (on clarinet), followed by "Demolition Baritone," showcasing the talents of Sam Thorton (on baritone) in a heavily improvised number dedicated to the free jazz style of today.

Leaving For Home takes one on a nice ride to a destination, connecting new material in one riveting performance. The album is replete with solo journeys from players who represent the top echelons of the British jazz world. Byrne has carved out a unique place of his own with this audacious, fiery recording in the finest big band tradition.

Visit Colin Byrne on the web.

Crazy Monday; Talking; 1916; Leaving For Home; Time To Remind Me; As If Only; Demolition Baritone.

About The Colin Byrne Jazz Orchestra