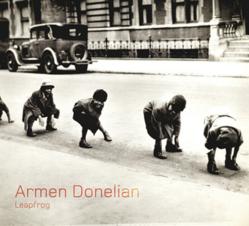 While cohesion and individuality, by their very definitions, may seem to be at odds with one another, the music on Leapfrog reconciles these two opposing ideals without a problem. For his ninth date on the Sunnyside label, pianist Armen Donelian has together a program of strikingly modern originals that showcase the cutting edge talent and simpatico sensibilities of his band.

The personnel in Donelian's quintet might, at the surface, seem like an intergenerational mishmash, but that couldn't be further from the truth. Donelian and veteran bassist Dean Johnson began making music together in the early '80s, and the pianist's work as a jazz educator at institutions like The New School and William Patterson University brought him into contact, at various times, with tenor saxophonist Marc Mommaas, guitarist Mike Moreno, and rising-star drummer Tyshawn Sorey.

As individuals, each player puts his own imprint on the material at hand. With an ability to inhabit a groove, while simultaneously disassembling its parts, Sorey slams with cymbal-centric fury ("Rage") and swings with a combination of taste and unrestrained abandon ("Smoke"), but he also knows how to play the minimalistic straight-man when the music calls for it ("Mexico"). Johnson proves to be the ultimate musical marksmen, nailing every musical hit and turn with a sniper's precision, but his skills don't end there. His big ears help him in helping others as he builds a comfortable, aural safety net around his band mates, and proves a strong soloist when stepping into the spotlight. Mommaas mines the mood of each piece to the fullest possible extent while Moreno, in similar fashion, manages to shift his sound from searing ("Rage") to soothing ("Mexico"), suiting the nature of each number. While Donelian plays several different parts here, his most important role is that of a bonding agent. The quintet unites under the banner of his piano work, and he leads by example, as all good teachers should.

Leapfrog proves to be light years beyond many other albums that wear the modern jazz label, because the individual contributions and the confluence of the group are of equal value, and Donelian deserves plaudits for balancing that equation and producing such a work.