By ERNEST BARTELDES
October 5, 2014
Sign in to view read count 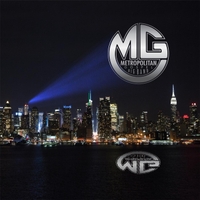 On the debut recording of the Metropolitan Gospel Big Band (led by saxophonist Duke Guillaume, the ensemble presents a collection of Gospel numbers arranged for big band format. The disc opens with "Nothing But The Blood," an up-tempo number that serves as introduction to the group and also features some individual improvised moments from the brass section. The tune is followed by "He's Everything To Me," a more straight-ahead tune featuring a fluid tenor sax solo.

Among the highlights is "Lord I Lift Your Name Up High," a Latin-tinged tune that highlights a different side of the band, highlighting Ted Cruz's piano and Olusegun Ajayi's percussion, which are the principal backing for the saxophone and trombone solos. The traditional hymn "The Old Rugged Cross" receives a bluesy treatment led by the saxophones and a cleverly arranged rhythm section.

Also notable are "Someday," another straight-ahead tune played with the full ensemble (with arrangement by the bandleader) that swings hard from the start, and also "He Is Exalted," an African-themed tune that has an almost cinematic feel thanks the initial crescendo the ends with a chorus and a saxophone solo from the bandleader. In the background Aleune Faye's Djembe is heard giving accents to the drums, and that is topped with accomplished solo from Cruz, who takes the tune to a completely different direction.

The album closes with "I Have Decided to Follow Jesus," a gorgeous ballad led by Guilaume's tenor in which the band is augmented by overdubbed strings to great effect. This is a disc that comes with many pleasant sonic surprises.

Nothing But The Blood;He's Everything To Me; Leaning On The Everlasting Arms; Lord I Lift Your Name On High; Just A Closer Walk; That Old Rugged Cross; Someday; He Is Exalted; I Have Decided To Follow Jesus