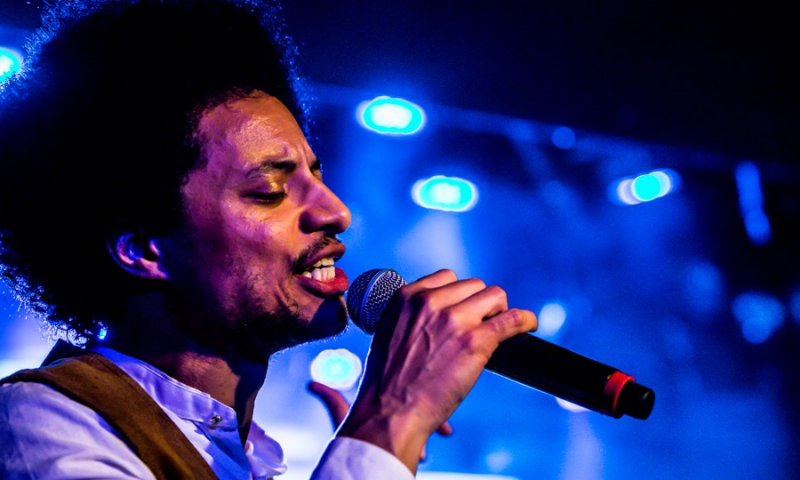 By the time José James took to the stage for his headlining slot on a quadruple-bill event that served as the second stand-alone concert in the 2018 NYC Winter Jazzfest schedule, three hours of music had already come and gone. Knower's electro-pop, complete with an expletive-laced introduction, ushered in the evening; the No BS! Brass Band dealt in punchy and anthemic tones and, at times, foreboding fare, even taking a detour to the '80s radio realm for a cover of Tears For Fears' "Everybody Wants To Rule The World"; and My Brightest Diamond telescoped tension, bringing a stark emotionality to the fore. Each had their factions of fans in the room, made evident through crowd response, but James owned the entire audience.

Arriving on stage decked out in a fringe vest, he kicked things off with a fairly loyal take on "Ain't No Sunshine." That early evidence, from the sartorial to the sonic, pointed toward the idea of a period piece. But then came "Grandma's Hands." While the song retained the churchy ideals and loving sentiments of the original, James went sideways for a spell, entering the rhythmic fray with vocalized scratching suggestions that would give any turntable artist a run for their money. From that point on it was clear that this concert was to be Bill Withers' work on José James' terms.

In its entirety, the program played through like a "greatest hits" set. And with the arrival and departure of each familiar number—"Who Is He? (And What Is He To You?)," "Use Me," "Kissing My Love," and a handful of others—James only strengthened his grip on the theme, infusing Withers' timeless tunes with his own brand of soul.

The singer was the undisputed star of his show, but a glory hog he wasn't. James shared the spotlight with guest vocalist Jean Baylor on "Hello Before," invited saxophonist Marcus Strickland to blow wild gusts on a few numbers, and often ceded the spotlight to his slick wrecking crew of a band. Drummer Nate Smith was given ample space to demonstrate his dizzying displacements and fractured groove brilliance, earning the "legendary" epithet James constantly bestows upon him; guitarist Brad Allen Williams delivered raunchy riffs aplenty, making his guitar work a sampler's dream; pianist-keyboardist Sullivan Fortner spun solos that touched on gospel-ized glory and glazed dynamism; and bassist Ben Williams bolstered the band with his solid yet percolating lines.

There wasn't a weak spot in this entire set and, save for the duet with Baylor, there was never a lull in energy. Whether it was jazz or not—a popular topic of discussion surrounding James these days—proved irrelevant. It was music that manged to probe while also speaking to populist tastes, and that's of greater importance to the story of this singer. When this music finally makes its way to the world (on a soon-to-be-recorded Blue Note release), it has the potential to be James' greatest success.