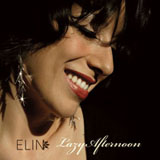 Swedish-born singer Elin (née Kathleen Clelia Elin Melgarejo) moved to the U.S. as a young adult, won a scholarship to study Portuguese in Brazil, and later received her musical training in vocal jazz at the University of Miami in Florida. Eventually the peripatetic singer settled in New York City, and the local jazz scene is all the better for it.

Her debut album, Lazy Afternoons, on the Blue Toucan Music label, employs a vast band and exciting Latin arrangements (from baião to bossa) behind Elin's lustrous vocals (in English, Spanish, and Portuguese). Her delivery is smooth and contained, each vocal line, scat solo, or horn break gliding sinuously into the next.

Elin wrote the arrangements with pianist Luiz Simas, who also co-produced the album and sings backup on it. They open the CD with a medley of "Fascinating Rhythm and "Telefone —an unexpected and surprisingly hip alliance of an American chestnut and a Brazilian classic. The title cut follows this inviting opener; an innately dreamy and seductive tune, "Lazy Afternoon takes on a subtle urgency here, with Elin's wistful singing and trumpeter Claudio Roditi's plaintive horn solos.

The CD includes several traditional Brazilian favorites—by Jobim and Nascimento, of course—but with more careful attention to musical detail than is usual: Listeners familiar with popular representations of Brazilian music will appreciate Elin's rendition of "Aquarela do Brasil, a return to the tune's cultural authenticity (with Mathias Künzli on percussion).

On two of her originals Elin departs from the Brazilian jazz lexicon: "Sugar and "La Luna engage with their lighter musical textures and demonstrate Elin's facility with both language and melody. Her third original (co-composed with Sean Harkness), "I Love New York, boasts clean melodic lines and a straight-forward Latin groove, in homage to the singer's adopted city. Elin also offers one jazz standard: a grit-free version of Ellington's "Lush Life —not your usual interpretation of the dark ballad.

Speaking on basis of first impression, Elin is not a dark singer. This is not a criticism. Brazilian jazz celebrates that which is radiant and joyous and moving, and in this regard, Elin more than matches the material she sings.