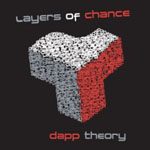 After a five years hiatus since the brilliant Y'all Just Don't Know (Concord, 2003), Dapp Theory returns with yet another stellar recording in Layers Of Chance.

For example, whereas Kokayi scored big with spectacular, machine gun performances like "Bermuda Triangle" and witty social critiques like "Trickle Down" and "Bad Air," Moon engages in less gung-ho, more sensitive exchanges, docilely drawing one into his words instead of spewing flamboyant and dashingly lashed out diatribes.

Such is the case in "Blackout," in which he cleverly plays with lexical fields pertaining to vision and perception. His tense, indecisive vocals places the narrator—a desperately lost, blinded soul searching to, in sum, "see through" the complexities and limitations of social interaction—in an emotive, insecurity-building spiral/revolving door, an effect also imparted to the captive listener.

That said, fans will still find the band's grabbing, MBase-fueled grooves in "After The Fact," with its perky piano/soprano sax interlude, as well as in the ostinato-driven "SOS," and "Deja Vu," a road-tested piece that encapsulates the group's musical spirit.

A multi-section composition, the track journeys back and forth (enhancing the feeling of deja vu the tune's text recounts) through diversely enthralling textural layers and atmospheres that Tordini's burly bass, Milne's spatial keyboards pads and Rickman's ricocheting, jerky beats create through colloquial interaction. The acute rhythmic sensitivity the players display in the manner they phrase this music, as well as the infatuating, offbeat thrust that results above which Milne's oblique, razor sharp motives, zigzag, has one ask rather humbly; "how in God's name do they do that?"

Augmented by two guests female vocalists brought in to harmonize entrancing, 3-against-4 polyrhythmic rounds above its minimalist theme and accompanying 16th note pattern, the title track's patchwork-like, collaged density dissipates to make room for a surprise, thinner-sounding piano/sax interlude, as well as for Moon and Stillman's solos, the latter in a relaxed yet rather inspired one. As a matter of fact, Stillman's elastic time feel adds another, welcomed dimension to the music's rhythmic flow.

If the strength of the performances herein is a token of what audiences can expect on upcoming live dates, than expect to be mesmerized and spend one exciting evening.

After The Fact; Blackout; Bodybag For Martin; SOS; If You Count It; Layers Of Chance; Tracing The Page; Bird Calls; Three Duets; Monk Walks; Deja Vu.