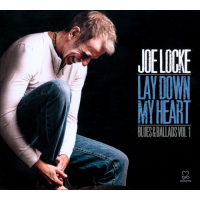 Vibraphonist Joe Locke doesn't seem to want to put his mallets down for very long. As soon as he arrived at Motéma Music, he released the modern-leaning Signing (Motéma Music, 2012) with the Joe Locke/Geoffrey Keezer Group, and partnered up with Lincoln's Symphony Orchestra for the somewhat serene Wish Upon A Star (Motéma Music, 2013). Now, less than six months after that symphony-enhanced songbook hit shelves, he delivers Lay Down My Heart, a collection of blues and ballads.

The idea of such an expansive musical personality boxing himself into such narrow territory may make this project seem mundane in theory, but the music is anything but.

He doesn't simply deliver a set of old hat blues tunes and done-to-death ballads done up in their standard form. Locke creates a program that captures the spirit and meaning of the blues without pandering to the simplest definition of said format, and his intimacy and directness always win over in the softest of settings.

Locke has always had a way of mining every piece of musical land space for everything it's worth, and he does it again here. He retains the funky essence that lives within Bill Withers' "Ain't No Sunshine" without aping the original, marries the quirky with the ebullient on Sam Jones' "Bitterwseet," and strikes a chord that's melancholy and hopeful all at once on the Bonnie Raitt-associated "I Can't Make You Love Me." Other notable performances include a take on "The Meaning Of The Blues" that's far more haunting than the norm and a buoyant-and-lively trip through Frank Foster's "Simone."

The majority of the program is built around refashioned tunes from various corners of the jazz world and beyond, but Locke contributes two originals that fit comfortably into this format: "Broken Toy" is a wistful number that serves as a breather between a pair of groove-settled tracks ("Ain't No Sunshine" and "Bittersweet"), and "This New October" gives the leader a chance to set the stage all by his lonesome.

Locke often works in quartet settings, but few of his bands are as forthright and purely purposeful as this one. Bassist David Finck, a long time friend of Locke's, and two of the vibraphonist's label mates—pianist Ryan Cohan and drummer Jaimeo Brown—come together in service of the songs and the general spirit of the project. In penning his own brief liner essay, Locke notes that "There is no highbrow concept here, just some songs pulled from a deep well, which will hopefully serve to feed the soul." Nobody could say it—or play it—any better than that.

Ain't No Sunshine; Broken Toy; Bittersweet; I Can't Make You Love Me; The Meaning of the Blues; Simone; This New October; Makin' Whoopee; Dedicated To You.