Laurie Anderson: Heart of a Dog

By NENAD GEORGIEVSKI
November 6, 2015
Sign in to view read count 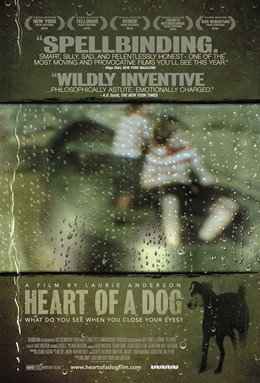 Renaissance woman and maverick Laurie Anderson is one of the most intensely engrossing artists of our time. Her work, whether music or performance or art is electric, alluring, thought provoking, forward thinking, funny, witty, ironic and deeply emotional. She does many things in different areas whether it's music, art, video, performances, design, dance, but above all she tells stories, where all these interests morph together to achieve its powerful effect. Her genius or theatrical presentation saw her present mixtures of narrative, song images, film and music with the latest in technology. Laurie Anderson is a modern day storyteller or a contemporary griot, and she utilizes her many talents and interests into telling stories.

There is an intimate warmth and bloom about her film and soundtrack Heart of a Dog, her first full length film work after the fantastic Home of the Brave film which captured Anderson performing her masterpiece Mister Heartbreak. (Warner Bros. 1984) Home of the Brave portrayed Anderson's ideas and performances which were so wild, and it captured her surreal visuals, the costumes that doubled as instruments, choreography, ethereal vocals and her storytelling talents. Even before these film she experimented with films and images that were connected with the stories she was telling. More than any art form, film making is best suited for capturing people' movements, but as such it is not really adept to capturing the movements of the soul. Very few people have managed to capture those movements and Heart of a Dog is one of them.

What was initiated as a short personal video essay by Arte television, as part of series of conversations with artists talking about the meaning of life, Anderson's story began as a tribute to the memory of her dog Lolabelle and pretty much turned into a visual analog for poetry. Her film offers a variety of images that follow her stories. The film serves as an intimate and profoundly touching guide into her thoughts, emotions and observations. At the center of the imagery and subtle ambiances and strings, stands her voice which is mesmerizing and hypnotic. Her abstract thoughts on a variety of subjects, such as death, love, loss, grief are tapping deeply into the subconscious and resonate strongly in the way poetry does. She loves to examine a certain subject from innumerable angles and that sounds like an amazing outpouring of stories in a stream of consciousness manner that subtly intertwine, mesh and morph together. The result to that is a compelling, single intimate story.

Anderson is observant of everything around her and makes connections between her dog, surveillance in the post 9/11 and data collection, language issues (she quotes Wittgenstein and Kierkegaard), her mom and thoughts on mortality intertwined with quotes from the Tibetan Book of the Dead. Renowned Russian director Andrei Tarkovsky has once said that "Artists are divided into those who create their own inner world, and those who recreate reality." Laurie's stories are intimate reveries through her inner world, but they certainly influence the reality by subtly altering our perceptions on things.

The soundtrack is really a journey through sound dimensions. The quiet ambiances and strings develop the atmosphere of this intrinsically developed sound poem and her readings make the music seemingly more alive, organic and evolving. The textures are added in layer after layer that shifts and morphs seamlessly behind her voice. At times, the music is sensuous, subtle and compelling, at others light, open and spacey. Put all together with her voice it's almost a transcendence into another-wordly place with new and intriguing musical landscapes. Her voice is a powerful musical instrument and it becomes music as well. The mood is gentle and hypnotic, yet mighty in its impact, but the overall effect is an ongoing reverie that slowly lulls into her mind state. All put together is like one of her one-woman production performances.

But the ending is what summarizes the whole trip together. The images of singer Lou Reed singing the compelling "Turning Time Around" song indicate that this is a quiet tribute to her late husband. It's almost like her having a conversation with him on a variety of topics in a symbolic yet public way. Heart of a Dog is a quiet, meditative, dreamy yet emotionally powerful and hypnotic art film that seduces, delights and saddens. One can't put a finger on it that easily as it can be encountered on many different levels. In the modern world, we seldom find ourselves in the grip of one emotion, but several, and those emotions well up spontaneously in the tangle of her words, music and visuals that grace our eyes and ears.