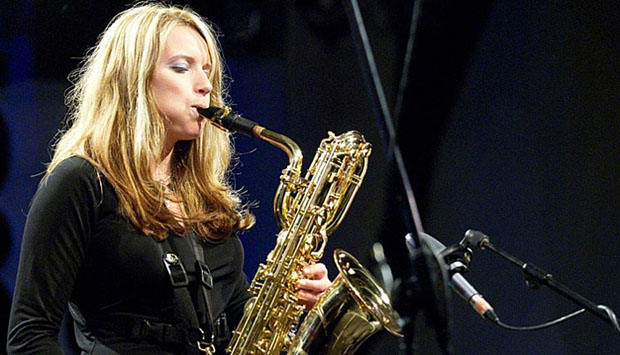 By R.J. DELUKE
March 30, 2011
Sign in to view read count
Swaying slightly, with eyes closed, Lauren Sevian pours a lot of heart and grit into the big, baritone saxophone—the largest of the most commonly played saxophones and an axe that looks even more considerable when seen against her small frame. She comes out with an imposing sound and welcoming style, put forth through a striking conception.

Sevian is a hard-working New York musician who's coming into higher recognition, abetted by some of the coolest big band gigs, including sitting among the excellent saxophones in the Mingus Big Band. But she's been impressing people for a long time now—well, a good portion of her not-all-that-many years—with her playing and musicianship. She first performed professionally at age 12 and seems to have constantly been involved with one band or another, one music program or another, while growing up in the small Long Island town of Miller Place.

Convinced she wanted to pursue music as a career early on, she won a competition in high school wherein the prize was getting to play a solo that same night with the Count Basie band. Sevian was playing alto at that point—nervous as hell, but she pulled it off. The experience reinforced that the direction she would take in music would be as a performer. She'd already fallen in love with jazz and her commitment to that calling has only gotten stronger.

In 2008, she came out with her first recording as a leader, Blueprint (Inner Circle, 2008), showcasing a band that really digs in and gets it done on tunes that cover a variety of moods, with creative original tunes. In 2010, she was part of the Grammy-winning Mingus Big Band—Live at the Jazz Standard (Jazz Workshop Inc. & Jazz Standard). She plays around the city in different settings, including the E-Flat band with her husband, saxophonist Mike DiRubbo. Sevian has played in all kinds of settings, but she's jazz all the way.

"Every day I need to have it in my life," she says without hesitation. "If I don't get a chance to play my saxophone, I don't feel complete. It's something I need. I feel like it's important to spread the message of this music. Jazz embodies so many different things like creativity, spirituality—a lot of different things. It's something I need to do. I feel like it's a calling for me. The days that I'm not doing something related to jazz, I almost have this edgy feeling. It's hard to describe."

It goes beyond that. Sevian is an artist for whom self-expression is important. She knows jazz symbolizes this and opens its arms to the makers of this music so that it can happen. "Nothing makes me happier than when I do a performance and it touches somebody. People are moved by it. That inspires me to continue doing what I'm doing," she says. "It's chance to express myself and be creative. It's a difficult life to be a musician; don't get me wrong. But it's this thing—I feel like I have to do it—something that I need in my life. And when I'm not doing it, I don't feel right. It's a very personal thing, for me." 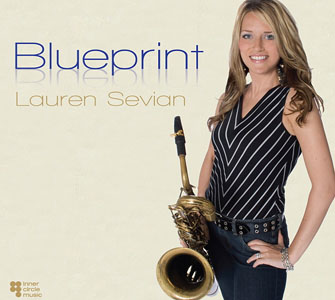 The jazz thing brought her to New York City in 1997 when she came to study at the Manhattan School of Music. In school, she got a chance to get her first big tour experience when she went on the road with the Diva jazz orchestra. In a sense, that started a string of big band experiences for Sevian and her baritone sax, including, besides her Mingus gig, Valery Ponomarev's Big Band, the Jack Jeffers Big Band, the Harlem Renaissance Orchestra, Charlie Persip's Supersound, Mike Hashim's Billy Strayhorn Orchestra, Kendrick Oliver and the New Life Jazz Orchestra, the Sweet Divines, Earl McIntyre's Big Band, a Benny Goodman Tribute Orchestra, the Harry James Orchestra, the Howard Williams Jazz Orchestra, and Travis Sullivan's Björkestra. She also plays with small groups at various venues in the city, always busy trying to make it work.

It was saxophonist Greg Osby's Inner Circle label that took on her solo project, in 2008. "He was really supportive of me. He was the one that really pushed me and said, 'You have to put a record out.' That was important to me," says Sevian. She did it with colleagues pianist George Colligan, bassist Boris Kozlov and drummer Johnathan Blake, and the group cooks. "I've known all of them for a very long time. It seemed like a really good fit. It was a lot of fun playing with those guys ... It still feels fresh and new when I play it," she says.

The first, and title cut, "Blueprint," gets to the heart of the matter right away. The intro shows that the supporting trio means business and is off to a strong ride, and Sevian boldly steps forward, tearing up the boppish tune with unwavering strength and inventiveness. It's a robust debut. 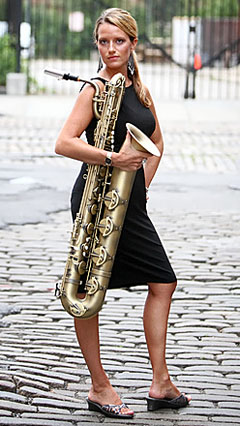 Sevian said that she wrote some of the music years ago, when she was still in high school. Composing, for her, doesn't usually involve sitting at the piano, tinkering with combinations and ideas. "Most of the material came about from the playing and practicing, more or less composing on the instrument," she explains. "Most of it came right from the horn itself. That's my medium, I guess—my compositional tool. That way it's a lot easier to learn the music because it's naturally fitting on the horn. Sometimes you sit down and write something out and it sounds great. But then when you play it on the horn it doesn't quite fit. With the baritone, the range is a lot lower than most instruments. I tend to write more when the spirit moves me, otherwise it can be kind of forced. Sometimes you have to write stuff. You have no choice. But if I'm in a situation where I have a choice, I would rather wait until something comes to me."

In Sevian's life, music was a constant from early on. Both parents and a sister are players, though not professionally. She has a brother who plays all the reeds and then some, and is a high school band teacher. She was playing piano at age five—in a classical vein—and started on sax at eight, following in the footsteps of her brother. When I was eight or nine, I started on saxophone. "There was always music happening in my house. It was my dad who introduced me to jazz when I was maybe 13 or 14. I immediately was drawn to it. My dad piqued my interest by lending me some recordings. My saxophone teacher, he laid even more recordings on me. That was it. I was off and running."

Her high school was on the small side, but its music program was strong. Its students and bands participated in a lot of competitions, and Sevian was heavily involved. "We had a great program. My band director encouraged me to audition for the Grammy high school ensembles, which I did my junior year. I did the Tri-State (competition), then I was selected as an alternate for the All-American. So I was pretty heavily involved in stuff outside of school as well. At Stonybrook University they had a wind ensemble and a jazz ensemble. I had a chance to play in both of those. Various all-county, all-state stuff.

"I remember after school there was always something that I had to do. At a certain point I had to give up sports because it was too crazy trying to juggle sports and music. But it was fun. It was a great experience for me to do a lot of playing."

Her support system at home and at school was important. Because the encouragement she received made an impression to this day, Sevian involved herself in the teaching aspects. "The whole education aspect of jazz is really important. It's almost like it's a growing industry now," she notes. " Being on the other side of it and seeing how important it is to continue supporting jazz in the schools—it's interesting to me when I go to do things at school, how much support and interest there is in this music. It's unbelievable. It would be nice if they'd support it a little bit more in the mainstream media. But, we're getting there."

Then the Count Basie Invitational came along, "an all-county thing, where different schools were invited to compete. They picked a couple of outstanding soloists. I happened to be one of them ... I remember going up there, playing a blues. I was so nervous—the most nervous I had ever been in my life. I was just hoping whatever came out was okay. It was a lot of fun. The guys in that band were great. It's funny, because now a couple guys that were in the band then, I know now. It's kind of funny looking back on that. That was another turning point for me. I would say at that point I decided I'm going to get really serious about the saxophone."

As for taking on the baritone beast, it started in her senior year in high school. "Even though I was playing alto in school groups and other groups, in groups like the Grammy band and all-state, I was playing baritone. I was starting to get more serious about baritone. When I auditioned at Manhattan School of Music, I auditioned on baritone." By then, it was full steam ahead with the baritone.

Explains Sevian, "I was playing alto, and I knew I wanted to play saxophone. But I felt like something was missing. I wanted to continue searching. I felt like alto wasn't really my voice. I was talking to my teacher about it. He suggested baritone. I said, 'What do you mean? It's humongous. I can't imagine trying to play it.' But then when I played it, it just felt right to me. It's so natural. I was worried it was going to feel large and cumbersome—at times, yeah—but overall it felt so natural to me ... When I auditioned on baritone, that was definitely the deciding factor. I'm going to be a baritone player. I'm going to really try and study the baritone. I was still playing some alto, when I first came to New York, but I wasn't playing alto at school at all. I decided I wanted to establish my own voice on baritone. I wanted to be known as a baritone player. That was it." 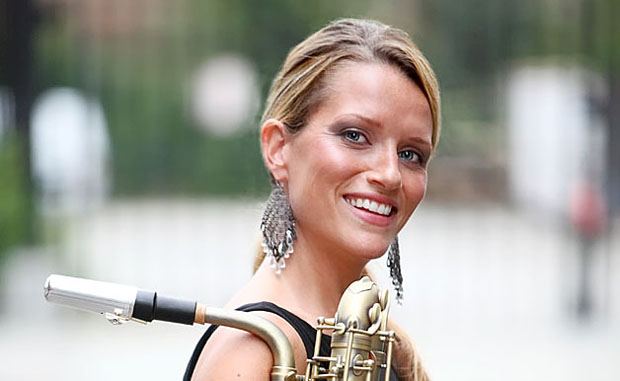 "I still have my alto, but I don't play it at all. My husband is playing my alto now," she says with a sparkle.