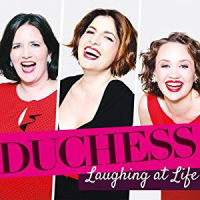 Jollity seems to be at a premium these days, so thank God for DUCHESS. This fizzy vocal trio is the antidote to all things grim, bringing joy to the masses one smile and song at a time.

Amy Cervini, Hilary Gardner, and Melissa Stylianou—three of the most captivating vocalists around today—clearly appreciate great music laced with good humor. With their trio debut—DUCHESS (Anzic Records, 2015)—they delved into a brand of Boswell Sisters-inspired music that you just don't hear much in the here and now. That overwhelmingly positive presentation—smart and sassy in conception, polished and pert in execution—put DUCHESS in a different category from all of the other vocal jazz groups out there in the mix. Oded Lev-Ari laid the groundwork with his arrangements, tapping into an appealing retro sound; the stylishly swinging trio of pianist Michael Cabe, bassist Paul Sikivie, and drummer Matt Wilson brightened the picture around and beneath the vocalists; guitarist Jesse Lewis and saxophonist Jeff Lederer added their inimitable instrumental voices to a number of tracks; and the three frontwomen put merriment front and center in their music.

That turned out to be a formula for success, so DUCHESS saw no need to rock the boat here. While there are tweaks to the cast on this sophomore date—Jared Schonig picks up where Wilson left off on drums, bassist Matt Aronoff takes the baton from Sikivie, clarinetist Anat Cohen and trombonist-vocalist Wycliffe Gordon join in as special guests on two songs apiece—everything basically works off of the same template used for the group's debut. The result? More high times, womanly wit, tight harmonies, unadulterated swing, and welcome surprises.

Laughing At Life starts in a pure jazz vein that's heightened by Lederer's horn ("Swing Brother Swing") and ends with a breezy tone that's established through Lewis' guitar work ("We'll Meet Again," "Dawn"). A bevy of musical gems rest between those points. Some, more or less, stay on the straight and narrow ("On The Sunny Side Of The Street"); many, however, do not. The ladies of DUCHESS let their hair down from time to time, capitalizing on bawdy themes with a nudge and a wink (Johnny Mercer's "Strip Polka") and impressing with rapid fire lyrics and turn-on-a-dime movements ("Everybody Loves My Baby"). And when they're not riding high over a cooking band or engaging in musical high jinks, they melt the heart ("Stars Fell On Alabama"). Simply put, this is a class act. DUCHESS' blend of the silly and sophisticated adds up to one satisfying musical sum.

Swing Brother Swing; On The Sunny Side Of The Street; Laughing At Life; Everybody Loves My Baby; Stars Fell On Alabama; Give Him The Oo La La; Where Would You Be Without Me; Creole Love Call; Hallelujah I Live Her (Him) So; Ev'ry Time We Say Goodbye; Strip Polka; Here's To The Losers; We'll Meet Again; Dawn.