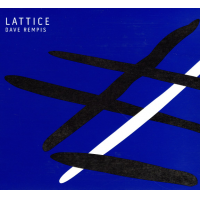 Since the AACM pioneered solo instrumental performance it has become a rite of passage for most creative musicians. In some ways the surprise is that saxophonist Dave Rempis, as one of the most fluent improvisers of his generation, has waited until now to record his first unaccompanied recital. That he rises to the challenge should be less of a surprise.

Rempis initially came to prominence in the Vandermark 5 serving as a compelling foil to the leader, but since then he has initiated a steadily increasing roster of projects and collaborations. Lattice represents the outcome of 31 solo concerts in 27 US cities over a four month period in spring 2017. Rempis has selected the six pieces from four dates, showcasing his three horns to add to the sonic variety. Two covers bookend four adventurous improvisations, in clear recordings which capture even the smallest detail.

In his quest for a personal solo vocabulary Rempis avoids the easy options under his fingertips. Few would anticipate that the introductory breathy didgeridoo-like tones, diaphanous whooshes and bracing baritone harmonics would ultimately lead to a rendition of Billy Strayhorn's "A Flower Is A Lovesome Thing." But although a soulful cry eventually prevails, he skirts the melody rather than plunging in. This exploration of the extremes continues on "Loose Snus" where a series of careening alto saxophone shrieks plateau in a bat register whistle.

Most cuts evolve through a succession of gambits spanning a broad emotional range. On baritone once again for the nervy "If You Get Lost In Santa Paula," he alternates plosive popping with spasmodic blurts. Then on "Linger Longer" after a lyrical tenor saxophone beginning, Rempis' rhythmically accents his dulcet embellishments, demonstrating his mastery of circular breathing in passing, as his fractious squawk coexists with keypad pattering.

Although Rempis takes Eric Dolphy's "Serene" much straighter than the opener, he nonetheless incorporates sequences of altissimo squeals and octave-shredding tumbles before a final reprise cosseting the bittersweet theme. It's a fine ending to a bravura display.

A Flower Is A Lovesome Thing; Loose Snus; If You Get Lost In Santa Paula; Linger Longer; Horse Court; Serene.