By JEFF DAYTON-JOHNSON
September 7, 2010
Sign in to view read count 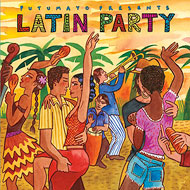 The redoubtable Putumayo programmers have already released ¡Baila! A Latin Dance Mix (2006), ¡Salsa! (2009) and Afro-Latin Party (2005), as well as nationally-themed but party-ready collections from Brazil, Colombia, Cuba, the Dominican Republic, Puerto Rico and the Caribbean. Are they perhaps scraping the bottom of the Latin party barrel with Latin Party? Ah, that would be to mistake the inexhaustible profundity of that barrel.

As it is, Latin Party conveys a convincing party message. It also conveys an interesting geographical message: namely, that one of the most important countries in the Latin music universe is the United States, and New York City in particular. In part, this is because so many Latin American musicians are gathered there, playing music from so many veritable Latin American cities. Thus, José Mangual Jr. sings on "Son de Nueva York," led by his uncle and city employee Luis: "Aunque el son es cubano, lo tocamos en Nueva York"—"though the son is Cuban, we play it in New York."

But it's not just that; the United States is and has been a tremendous site for synthesizing and innovating Latin music styles, as evidenced on this collection by Brooklyn Funk Essentials' "Big Apple Boogaloo" or "Mi Gente," by A.B. Quintanilla II & Kumbia Kings of Corpus Christi, Texas.

A second geographic concern is the complete absence of Brazil, surely one of the most party-prone and musically extraordinary countries in Latin America or any other part of the planet. Indeed, most but not all of the music heard here strays not too far from the Afro-Cuban heart of so much Latin American music, which means that not only Brazil is bypassed, but also the bulk of South America, outside of Colombian cumbia.

Being party music doesn't preclude musical excellence, of course: the alternating trumpet and saxophone of Regi Boyce and Regi Johnson on Quantic Soul Orchestra's "Regi Bugalú" is but one example of the delights of the musicianship collected here.

Beyond its geographic message, the record paints a portrait of Latin music as inclusive and innovative, and it's an accurate portrait at that. The Afro-Cuban core of most of the music on the disc is a syncretism of continents and cultures to begin with, and this cross-section suggests that the borrowings and adaptations haven't stopped since. In addition to the US-based fusions mentioned above, witness, for example, the Jamaican elements taken joyously on board by Medellín's Los Coffee Makers, or London's Ska Cubano.

Latin Party follows the best of the Putumayo collections: those who know the terrain will find something new here; newcomers, meanwhile, will succumb to the warm invitation to explore the territory.