By ROB ROSENBLUM
November 18, 2017
Sign in to view read count 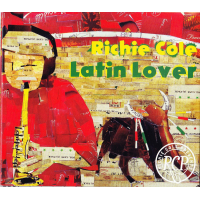 Last year alto saxophonist/arranger Richie Cole released an album called the Many Minds of Richie Cole. Latin Lover could easily have carried the same title. There are indeed many minds in Cole's head— often seemingly incompatible with each other. Several of them are in this CD.

Cole was grabbed out of Berklee School of Music by Buddy Rich, who needed a replacement for Art Pepper in his big band in 1969 and after being featured with Rich and shortly after with Lionel Hampton he set out on his own. He toured frequently with vocalist Eddie Jefferson until the latter's untimely death and has built his reputation on being an unpredictable jokester who plays serious jazz with a smile.

Latin Lover continues Cole's brand of humor, starting off with the unlikely tune, "If I Only Had A Brain from the Wizard of Oz." On top of that, he defies the somewhat melancholy theme, kicking it into up tempo with a Latin rhythm. Oz fans may be offended, but Cole pulls it off well, with a sharp and adventurous solo. Who knew this song could be considered for a jazz album!

He keeps the heat up with "Celito Lindo" and then slows it down with a pensive "L'Eclipse."

Cole reverts once again to his sense of humor by digging into "The Lonely Bull," made famous by the Tiajuana Brass and the vocal group and guitar behind him reinforces the corny essence of the tune. "Serenata" begins with a bull fight anthem with all the usual Latin flair only to magically transform into a quiet and slow tango.

"Laughter in the Rain" allows Cole to duff his cap to his unaccountable appreciation for 1950's pop music. The song, written by Neil Sedaka, has all the earmarks of the era, but with more of a Latin tinge than the original.

"Girl From Carnegie" is essentially "The Girl From Ipanema" with some melodic revisions. It begins with a Jobim like guitar intro and continues with a light Latin tempo.

There are two outliers, and they are the gems on this album.

The first is "Harlem Nocturne." Cole shows his most sensitive and emotive side on this. He wraps himself deep within the very poignant sadness of the tune. It is shear beauty.

The other is the album's final song, "Amost Like Being In Love." Cole owns this song. He plays it frequently on gigs and while he has probably performed it thousands of times, he just screams this song out. It is the most up-tempo tune of the set. It begins with a subtle Latin background, and then switches to straight ahead jazz, while Cole launches into his best solo of the recording. He plumbs the entire range of the alto, sometimes veering away from the changes before snapping back in. Guitarist Eric Susoeff and pianist Kevin Moore maintain the intensity before Cole bursts back on the scene with a couple bebop quotes and then back to the melody, with a few showy runs thrown in, and finally a very abrupt ending.

Cole has moved from New Jersey to Pittsburgh a few years ago and has become immersed in the jazz scene there, no doubt raising the level a bit. He has surrounded himself with talented locals and those are the people he chooses to record with.

Cole's band of Susoeff and Moore, as well as bassist Mark Perna and drummer Vince Taglieri, may not be the big names that were on Cole's early Muse recordings, but it is a very compatible group. Their familiarity allows Cole to spruce up the songs with some simple, but effective arrangements, which raises the level beyond that of a good jam session. You can hear from the interplay that these musicians know the leader and can respond to his every whimsy.

Overall, this is a fine jazz album, well written, well recorded and performed with solid soloists, with Cole playing with his usual inspired consistency. My only criticism is that there are too many back to back medium slow tempo songs.

Track Listing: If I Only Had A Brain; Cielito; L'Eclipse de Lune; Lonely Bull; Serenata; Laughter in the Rain; Girl from Carnegie; Harlem Nocturne; Island Breeze; Indicted for Love; Malibu Breeze; Almost Like Being in Love