By KARL ACKERMANN
September 2, 2014
Sign in to view read count 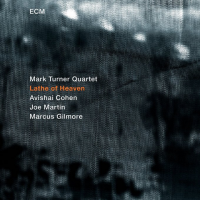 Saxophonist Mark Turner favors quality over quantity. Lathe of Heaven—his first outing as a leader since 2001—is his first on the ECM label. Turner has hardly been absent from the music scene as the intervening years have seen him as a sideman for guitarist Kurt Rosenwinkel and saxophonist David Binney among many others. He's gathered strong praise for his role on trumpeter Enrico Rava's fine New York Days (ECM, 2009) and as one-third of the trio FLY with drummer Jeff Ballard and bassist Larry Grenadier.

Turner cites saxophonists Wayne Marsh and John Coltrane as primary influences; not surprising in that Turner demonstrates the same cerebral approach to his craft. Equally influential was growing up in a home where R&B was frequently in the air and that soulful element is always present in Turner's playing. The interactions within the group, particularly between Turner and trumpeter Avishai Cohen are traditional in methodology, retaining the melody throughout almost ubiquitous and intricate improvising. Without benefit of a chord instrument, Turner supplies the overall texture of these pieces by utilizing the full range of the tenor in pieces that are as expressive as they are inventive.

The title track demonstrates that beyond Turner's classic orientations, he has developed a seasoned style that can be easily identified as his own. His use of recurrent structures is balanced with complex time signatures and episodic jumps. The quartet takes the limited number of empty spaces and gives them a positive form unifying the composition and improvisations. "Year of the Rabbit"—a compliment to Fly's title track from Year of the Snake (ECM, 2012)—is angular with post-bop style solos but is in keeping with the overall mid-tempo tone of Lathe of Heaven. "Brother Sister" is a cover version of another composition from the aforementioned Fly recording but here given a fresh, more wide-open make-over.

"Ethan's Line," refers to pianist Ethan Iverson with whom Turner collaborated on drummer Billy Hart's All Our Reasons and One is the Other (ECM, 2012 & 2014) and provides Turner some deeply inspired solo time. Bassist Joe Martin's pensive solo opens "Sonnet for Stevie," a tribute to Stevie Wonder and an opportunity for Turner to immerse himself in the blues. Cohen—who has yet to receive the wider recognition he deserves—has a beautiful extended solo that validates stylistic comparisons to Miles Davis.

Lathe of Heaven demands of its musicians, a pluralistic intelligence in order to sustain the core lyrical melodies in the face of pervasive improvisation. The always present rhythm section of Martin and drummer Marcus Gilmore adeptly handle the task of keeping the music grounded but flexible. It's a literate collection of clearly articulated ideas, free from pyrotechnics but full of furtive passages, emotion and harmony.

Lathe of Heaven; Year of the Rabbit; Ethan's Line; The Edenist; Sonnet For Stevie; Brother Sister.