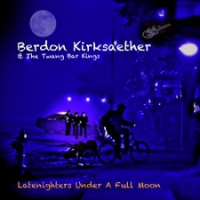 It is really no longer appropriate to call American Music American. It is Global music and that is all it can be. Gone are those days when shellac and vinyl discs had to be exported. Music from anywhere on earth is as close as one's computer.

Norwegian blues? Why not? Guitarist and composer Berdon Kirksaether has made a cottage industry of it at home, first as part of the locally renowned CIA and now as leader of the trio, the Twang Bar Kings. The elaborately titled Latenighters Under a Full Moon turns out to be quite apropos in its conception.

This eleven-selection disc plays like a noir suite made up of moody and tense mini-suites. Kirksaether can seamlessly adopt any guitar personae or combinations thereof he wishes. "Conrad's Bar Bounty" could have been conceived and executed during a jam session between Clarence "Gatemouth" Brown and Kenny Burrell. "Rendezvous" could easily be Jim Hall covering a Jimmy Buffett song while "Midnight Haze" would have been welcome on any Santana recording.

A blues musician? Certainly, but that is not all of the tricks in Kirksaether's talent bag. On Latenighters, he achieves the near impossible by achieving so many disparate moods in seemingly seamless songs bound by little more than a harmonic spider web. Each piece flows gently into the next making the whole of this recording greater than the simple sum of its parts.

Go Cat Go; Cool Cats on the Move; Conrad’s Bar Bounty; Rendezvous; Jumping the Might Away; Midnight Haze; Another One Going Down; Take it Away; Pitstop By The River; Walk and Your Feet Will Follow; Latenighters Under a Full Moon.