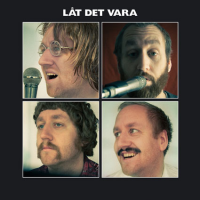 If someone told you that jazz wasn't invented in America, you would say they were crazy. Insane. Next thing they might submit is that Christopher Columbus didn't discover the New World. Oops, okay discounting the Native Americans already here, there's that Scandinavian guy Leif Ericson that came through the East Village about 500 years before Chris.

That's why you might avoid any musical debate over the finest tenor saxophonists working in jazz today. When fans declare the Swedes, Mats Gustafsson the best free jazz and Jonas Kullhammar the best post-bop tenors, don't take the bait. You might just loose your shirt.

Kullhammar's Quartet of Torbjörn Gulz (piano), Torbjörn Zetterberg (bass), and Jonas Holgersson (drums), together since 1998 is releasing their final recordings with a 10" LP covering "A Love Supreme" (already sold out), a soon to be released cover album of Swedish jazz songs, and Låt Det Vara or "Let It Be." The cover photo, a spoof on The Beatles cover of the same name, signals the same message as Paul, John, George, and Ringo is their good-bye.

The quartet plays six tracks, then is joined by a sextet for the title track. Opening with a gong and overblown horns, "Låt Det Vara" romps through a folky up-tempo piece that is life affirming and includes the saxophonist's father on drums.

Elsewhere there is the irrepressible sound the band has been known for since 1998. Part John Coltrane Quartet and part Von Freeman Chicago sound, the quartet can maneuver through muscular post-bop material like "Allting Kan Gå Itu," a piece that threatens to come apart at its edges, but thankfully for the blues, never does. Both Kullhammar and Gulz unleash their inner 'out' music. They also work a bit of John Klemmer (or was that Jan Garbarek?) into the meditative piece "Domedagen." The noteworthiness of the working quartet is their ability to scorch through a tune such as "KBT" or "Födelsedagen" with all the passion of a firebrand, but never have their music skid off the runway.