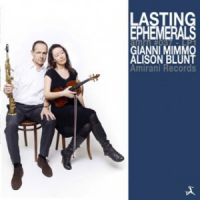 To say that someone is a virtuoso on their instrument isn't a statement just about playing ability. Virtuosity implies a deep level of understanding and insight into the way an instrument works, its history, and its sonic capabilities. This knowledge extends to an understanding of the physics of sound production: the minute details of how the sound is generated, how it is altered tonally, timbrally, and otherwise, where the overtones lie and how they can be manipulated, how environmental factors figure into one's sound. Though technical ability comes from within, the total command of one's voice is shaped by the playing environment and the social interactions occurring during performance. Thus, a virtuoso can elicit the widest possible range of expression and a fuller realization of the his (or her) own capabilities and how these relate to the matters at hand: the music being played.

In this regard, soprano saxophonist Gianni Mimmo and violinist Alison Blunt are true virtuosi. Mimmo has complete command of the soprano saxophone. At this relatively early stage of his career, his sheer instrumental prowess is already legendary throughout Europe, and is amply documented on a string of excellent recordings for his own Amirani Records label. Mimmo is also virtuoso when it comes to self-expression and communication via his instrument in any number of disparate musical settings; from the most abstract free improvisation to classical, electronic, and modern jazz. Though he is involved in several music and multi-media projects with Italian avant-gardists, Mimmo also maintains working collaborations with cellist Daniel Levin, pianist Gianni Lenoci, and guitarist John Russell.

A graduate of the Guildhall School of Music & Drama, Alison Blunt, like Mimmo, is fascinated with sound, motion and space. These interests have led her well beyond the classical realm and into projects which probe the boundaries between different art forms and musical genres. On Lasting Ephemerals proves herself to be a remarkable performer. Though she's heavily credentialed in both the contemporary classical and traditional folk music worlds, she's made quite a splash of late on the UK avant-jazz scene, working in small ensembles with the likes of percussionists Tony Marsh and Mark Sanders, flutist Neil Metcalfe, cellist Tristan Honsinger and a host of like-minded young UK-based improvisors.

Though comprised of three tracks Lasting Ephemerals really works as a continuous performance. The duo blends a contemporary chamber music approach with instant composition, sound texture explorations, and sudden lyrical flights. The duo's chemistry is palpable as they freely cross boundaries, inviting contradictions between melody and chaos. The live recording in St. Leonard's Shoreditch Church, in London, makes extensive use of the space's natural reverb and drenches the proceedings in a ghostly, spectral mood.

A Frank Zappa quote on the album jacket ("Music, in performance, is a type of sculpture") and Massimo Ricci's liner notes both refer to the sculptural, three-dimensional aspects of this work. The sense that Blunt and Mimmo are really using the space to make certain harmonies and harmonics pop out into sharp relief is quite apparent, even during a cursory listen to Lasting Ephemerals. Sound engineer Matt Saunders and mastering engineer Maurizio Giannotti are to be lauded for this, as well as the artists. The sound is remarkably crystalline, clear and pure throughout.

Musically, Blunt and Mimmo are inclined towards melodic and, at times, harmonic, non-idiomatic improvisation. They take the term "instant composition" seriously, and the results—though quite abstract at times—are not entirely the province of the "furrowed brow" crowd. They can bring the noise as well as anyone on the European scene, and neither are averse to pregnant silences and long tension-filled pauses, yet they are similarly unafraid to acknowledge the melodic aspects of improvisation. Playing together, they create moiré patterns of harmonies and harmonics that ping in and out of one's consciousness like some crazy bird flying a little too close to your ear. They twine lengthy phrases that twist unpredictably, landing in new and unexpected territories. Their lines are so interesting that one forgets how difficult they must be to play; Blunt's perfectly intoned sliding double stops, and Mimmo's whirling sound vortices are the stuff of true virtuosos, but in the hands of these musicians, they express something far deeper than hundreds of hours spent in practice rooms. While a blow-by-blow description of Lasting Ephemerals is clearly an insufficient means to convey its sonic and emotional impact, it's safe to say that this album, taken as a whole, is a stunning document. Lasting Ephemerals is free improvised music of unparalleled beauty and delicacy.