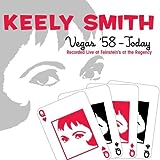 In her lovely big band tribute to Louis Prima, Keely Smith sings the chestnuts that we remember him by. Her voice is in top form and she's able to provide the kind of intimate humor that she and Prima exhibited together. It's a live session that contains all the natural elements that make you feel like you're there.

When she performs in Las Vegas, everyone feels a part of the show. Smith moves around the audience and brings everyone into her performance. She gives each guest a souvenir to take home—the kind that sticks around forever. These memories last and last and last.

Her gentle ballad performance on "More Than You Know" provides a sample of her best work. A heartfelt performance such as this will convince even those who go to Las Vegas to play that there are more important things to experience in the desert mecca. The city has art if you know where to look for it. Keely Smith melts your heart.

"Jump, Jive & Wail" characterizes Louis Prima quite well. The band provides a casual backdrop for this one. Jerry Vivino and Ben Williams prove to be capable partners for the veteran singer. She interprets "Buona Serra," "Angelina," "Zooma Zooma," and "Che la Luna" with the same comical spirit that she and Prima used to create together many years ago.

Louis Prima, who passed away in 1978, is sorely missed. Today, Smith has other singing partners, and the comparison reveals that... well, no one can quite measure up. Smith, however, continues to bring us the same kind of rewarding performances that she did when Prima was with her. She has the same fresh appeal she did fifty years ago, and she continues to bring Las Vegas a top-notch winning performance as often as possible.

When You're Smiling; I Gotta Right to Sing the Blues; Basin Street/Sleepy Time Down South; More Than You Know; Up a Lazy River; Don't Take Your Love from Me; Jump Jive & Wail; Sweet & Lovely; Buona Serra; Angelina Zooma Zooma/Che la Luna; Just a Gigolo; I Wish You Love/That Old Black Magic; What Kind of Fool Am I.