By MARC DAVIS
September 2, 2015
Sign in to view read count

Listen to that organ solo in the opening number, 'Zoltan.' It sounds like Keith Emerson on various ELP records. 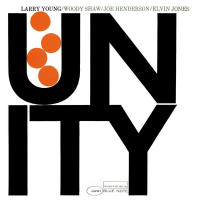 In high school and college in the 1970s, I was a huge fan of progressive rock, especially Yes and Emerson, Lake & Palmer. As a pianist myself, I was floored by Rick Wakeman and Keith Emerson. How did they do that? Fast, creative, loud, part-rock, part-jazz, part-classical. Wow.

My obsession with Moog synthesizers led me to classical music through the back door. ELP led to Switched On Bach, which led to, well, real Bach. Later, the same impulse led to electric Chick Corea and Return to Forever, the band and the album. That, naturally, led to acoustic Chick Corea, and all of jazz followed.

I never consciously explored the roots of progressive rock into jazz, and it's not really obvious. But now that I've heard Larry Young's Unity, I believe I've found the missing link.

This is progressive rock in embryonic form. Still mostly hard bop, but with enough organ bravado to forecast jazz-rock to come.

On the surface, this is all jazz. Look at the lineup: Joe Henderson on sax, Woody Shaw on trumpet, Elvin Jones on drums and Young on organ. Horns and rhythm section—jazz!

But listen closer. Sure, the horns are great, and they bop like crazy. Though it's Larry Young's name on the cover, it's the horns that dominate the album and usually take the lead solos. But listen to that organ solo in the opening number, "Zoltan." It sounds like Keith Emerson on various ELP records. Same on the next tune, "Monk's Dream," which is wilder than even Monk himself ever imagined.

The thread runs throughout Unity. I hear Keith Emerson every time Young goes off on a solo. And, of course, Young wasn't imitating Emerson. It's the other way around. Unity was in 1965. It's no coincidence that Emerson's first progressive rock band, The Nice, came just two years later, and ELP started three years after that, in 1970.

Yes, Unity rocks—but obviously it's a jazz album. Shaw is simply fantastic, and he wrote half the songs. What a shame that he never became a household name. Henderson is solid and occasionally wild and crazy. And Larry Young is no mere Jimmy Smith imitator. Smith played mostly blues; Young plays rockish-bop. Why is he largely forgotten?

Later, Young would play with real rockers like Jimi Hendrix and Carlos Santana—both of whom were steeping in the blues, as were Jimmy Smith and Larry Young.

When I'm in the mood, I still enjoy ELP, Yes and Chick Corea. (And if you still don't get the connection between ELP and jazz, check out the YouTube video of Keith Emerson and Oscar Peterson dueting on the Meade Lux Lewis classic "Honky Tonk Train Blues" in 1976. It's amazing.)

But now that I've discovered Larry Young—late to the game, I admit—I've got a new favorite to obsess over. I'm looking forward to exploring his catalogue.