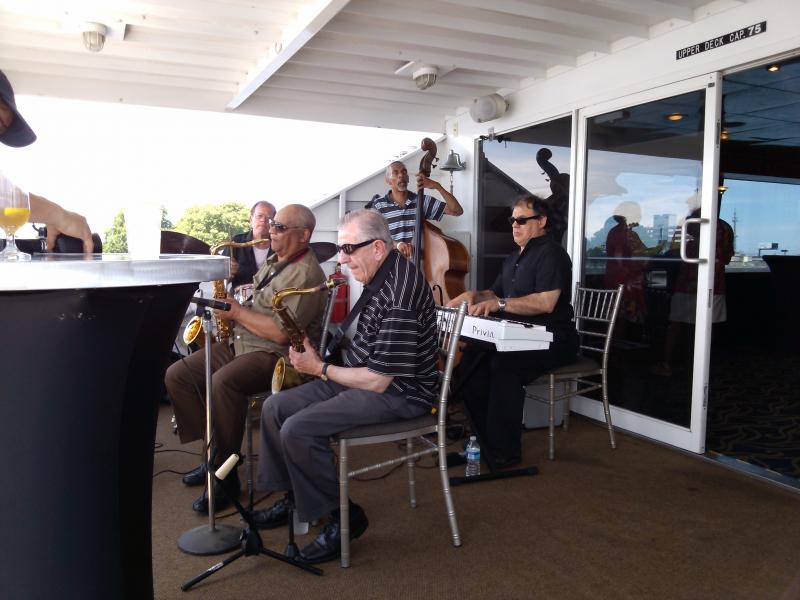 The Jazz Bridge, a Philadelphia area organization whose meritorious mission is to assist local jazz and blues musicians and vocalists in times of crisis, sponsors numerous concerts, but this was their first cruise event, and they went all out, with an Elite private yacht leaving Penn's Landing in the early afternoon for a trip up and down the Delaware River with some fine jazz, cocktails, lunch, a raffle, and an award ceremony. Jazz Bridge co-founders Suzanne Cloud and Wendy Simon Sinkler covered all decks making sure the sold-out group of jazz fans were having a good time. And judging from the smiles, laughter, and off the cuff comments, all expectations were exceeded.

River boat jazz has a noble tradition as far back as the Mississippi River steamboats which stopped at various ports to entertain the locals. A lot of jazz was literally invented on those trips. This one was more conservative. It didn't stop anywhere. No one had to be carried off the boat drunk. No gambling. It was a civilized, almost blue blood occurrence with a twist of rhythm. The boat went up past the Betsy Ross Bridge to the north and south to the Walt Whitman Bridge, skirting the Camden waterfront, the Adventure Aquarium, and the Battleship New Jersey, providing spectacular views of the Philadelphia skyline at every turn.

Cloud encouraged people to loosen up and rock to the beat, Sinkler emceed the raffle with the flair of a Jerry Blavatt, and Slife Productions CEO Jason Fifield captured much of the action with his unobtrusive camera, saying with a chuckle, "If I had brought my usual equipment, it would have sunk the boat." The Jazz Ambassador Award was given to Chris' Jazz Café for twenty-five years of providing the best of local and international jazz even during a time when the economy and their budget took a lot of hits. From the celebrity standpoint, WRTI DJ Jeff Duperon could be seen mingling with everyone in sight, obviously delighted that all this was happening.

If the boat was a high class yacht with a genial and efficient staff that could have manned an ocean liner, the band members for the occasion consisted of a Rolls Royce of Philly musicians: Larry McKenna and Bootsie Barnes on tenor saxophone, Tom Lawton on piano, Mike Boone on bass, and Jim Miller on drums. They had no idea what they were going to play, but, having worked together often, they delivered two high class sets of sweet and swinging tunes. It seemed that Bootsie was calling most of the shots, but however it happened, they made great music out of songs like DeRose/Sheffer's "The Lamp is Low," Jobim's "Wave," Duke Ellington's "How Could You Do This to Me?" and Horace Silver's "Juicy Lucy." The McKenna and Barnes duo, with their contrasting but well-synchronized swing and bebop emphases, never grows old. It's rare to hear such artful sonorities and inventiveness as these guys deliver.

Thank you, Jazz Bridge for another great day in Philly.