By JACK BOWERS
April 24, 2008
Sign in to view read count
Larry Gelb says he can't remember a time when he wasn't writing songs. That may not be overstating the case, as Gelb, now fifty-six, recorded his first album at the ripe old age of thirteen and has written more than eight hundred songs, thirty-six of which enliven these two delightful albums ("The Honeymooners Now" and "I'm Not Supposed to Fall in Love" appear on both). 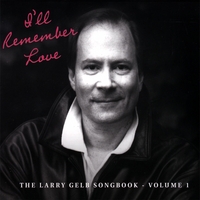 Gelb composes often for the theatre, and fifteen of the twenty-six tunes on I'll Remember Love are from half a dozen plays for which he has written the music and lyrics (like Stephen Sondheim, Irving Berlin, Cole Porter and Frank Loesser, among others, he basically works alone). The album's subtitle, The Larry Gelb Songbook, Vol. 1, signifies that it is the first in a series of CDs on which 250 of Gelb's songs will be released over the next three years. Even though that's a heap of songs, it's not close to even half of his output.

Gelb's melodies are charming, his lyrics literate and clever if less than profound, and one can easily picture them as part of a pleasant theatrical experience. While many of the songs depict the various aspects of love, there are sobering departures, such as "Blood of America," "I Killed a Man I Didn't Know" and "The Dirty Business of War." There's whimsy aplenty too, as in "The Caterpillar Song," "Being Unemployed," "If I Were an Only Child," "The Vegetable Song," "Hum a Few Bars" and "The Honeymooners Now" (with Laura Jordan cast as the steadfast Alice Kramden).

To accomplish his purpose on Songbook, Gelb has engaged the Broadway-seasoned voices of Jordan, Paul Binotto, Kyle Bradford, Kelly Grant, Amy Justman and David Pearlman, each of whom is a pleasure to hear (newcomer Bradford is especially impressive) as they remind us that the future of musical theatre is in good hands. Gelb is at the piano with Steve LaSpina on bass, Dan Weiss on drums. Violinist Jesse Mills is heard on a number of tracks. 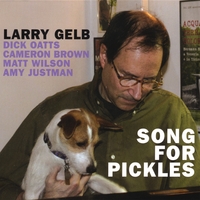 Only two of the dozen themes on Song for Pickles—"Not Supposed to Fall," "Evil Is in Vogue"—were written for the theatre; each of the others was inspired by a person, a place, an event or, in the case of Pickles, a Jack Russell terrier. "The Honeymooners" reappears, this time as an instrumental with Dick Oatts leading the way on soprano saxophone. LaSpina, Weiss and Mills have been replaced by bassist Cameron Brown, drummer Matt Wilson and multi-reedman Oatts with no decrease in quality.

The opening "Waltz," with Oatts again on soprano, was written for Gelb's piano teacher (and life-guru), Margaret Steadman Chaloff, "On the Hudson" for his wife, Betsy, the ballad "Jesse" for his daughter on the day she was born. When Pickles became a part of the family, Gelb marked her journey from Arkansas to New Jersey with a swaying dance (Oatts on flute). The inventive ballad "Harold Arlen" is Gelb's "love song" to one of his musical heroes, written on the day of Arlen's passing, while the earnest "Cave of Mach Pelah" is based on a fragment of melody Gelb once heard in a synagogue.

Completing the album are "August in Maine," "Rainbow Room" (a good place to get married, he observes) and the sensuous "Sicily Enough" (Oatts, flute). Amy Justman, the only vocalist on the album, is heard on "Hudson," "Evil," "Jesse," "Harold Arlen," "Maine" and "Rainbow Room," while "Not Supposed to Fall" is another instrumental with Oatts a standout on flute.

At least two things about Gelb are quite clear: first, he's an incurable romantic, and second, he's a consistently impressive songwriter (who reminds me now and then of the great Matt Dennis, even though Dennis rarely wrote his own lyrics). Gelb's songs are imbued with warmth and perception, and I'd not be surprised if some of them had enough staying power to become standards. Here are two tasteful showcases, each of which is easily endorsed as an introduction to one of the country's most accomplished, prolific—and fairly unknown—songwriters, Larry Gelb.

Tracks: The World of a Dream; Welcome to the City; I'm Not Supposed to Fall in Love; Blood of America; Some Other Christmas; It Must Be Love; The Caterpillar Song; The Dirty Business of War; As Near to You as Love; I Killed a Man I Didn't Know; Be in Love with Me; Being Unemployed; The Honeymooners Now; Waiting for My Rosebuds; If I Were an Only Child; Sail Away My Heart; The Vegetable Song; The Ten Thousand Joys; Delicious Child; Perfect Paris Room; Love So Dear; Hum a Few Bars; Forever Today; It Didn't Happen; Happy Birthday, My Love; I'll Remember Love.

Tracks: Waltz for Madame Chaloff; On the Hudson; I'm Not Supposed to Fall in Love; Evil Is in Vogue; Jesse; The Cave of Mach Pelah; Pickles; Harold Arlen; The Honeymooners Now; August in Maine; Rainbow Room; Sicily Enough.