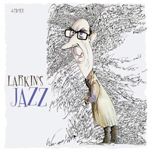 Philip Larkin is one of the best-loved British poets of the twentieth century—the man who claimed in Annus Mirabilis that "Sexual intercourse began in nineteen-sixty-three..." A librarian at the University of Hull in the north-east of England, he was a complex character whose poems were often witty and well-observed but could also appear cynical and contemptuous. He was also a lifelong jazz fan, declaring in the opening line to The Dance: "Drink, sex and jazz—all sweet things, brother..."

Larkin's Jazz is part of the commemoration of the 25th anniversary of his death. It contains 81 of the tunes that he loved and enjoyed from his early-teens, beautifully packaged with detailed essays and notes. The cover illustration is by noted cartoonist Gerald Scarfe, whose only previous album cover was Pink Floyd's The Wall. The essays by Trevor Tolley and John White, the latter a friend of Larkin's in Hull, are fascinating insights into the poet's love for jazz, especially from the Swing era.

The recordings cover the period from 1923 ("Riverside Blues" by Joseph "King" Oliver's Jazz Band) to late-1959 (Jimmy Witherspoon's "No Rollin' Blues"). They are presented chronologically in terms of their appearance in Larkin's life, so the first tune is Ray Noble's 1933 recording of "Tiger Rag"—the first jazz record Larkin bought—while most of the '20s and '30s recordings are on the second CD, covering Larkin's time at Oxford University.

Classic tunes abound across the collection—Duke Ellington's "East St Louis Toodle-oo," or Earl Bostic's wonderful "Flamingo" for example—although some, such as the songs by Billy Banks, sound dated and are now mainly of historical interest. Vocalists are well-represented, including Billie Holiday, Louis Armstrong and Jimmy Rushing.

Tellingly, the collection includes nothing recorded after 1959. While Larkin reviewed jazz for the Daily Telegraph newspaper from 1961-1971 he declared that his taste in jazz "stops at 1945" and his reputation was as a man with active contempt for the "modernists."

As White and Tolley note, this contempt was often overt—White refers to Charlie Parker, John Coltrane and Miles Davis as Larkin's "Public Enemies." Larkin described Coltrane as "the master of the thinly disagreeable" and Sonny Rollins as "producing sounds of such repellent harshness..." Although Larkin occasionally wrote positively about Parker, Coltrane and others and, as the booklet briefly acknowledges, included Davis among his favourite trumpet players, White asserts that this apparent admiration for modern jazz was a pretence "for the benefit of some Daily Telegraph readers."

Larkin was a knowledgeable and committed fan of a particular era of jazz and Larkin's Jazz demonstrates this emphatically. But even without this Larkin connection the album acts as a great "pocket history" of 35 years of jazz recordings: a great introduction to some of the finest instrumentalists and vocalists of that period—without, of course, those pesky "modernists" to spoil the fun.

CD1 (I Remember, I Remember): Tiger Rag; I'm Gonna Play Down By The Ohio; Ain't Misbehavin'; The Blues Jumped A Rabbit; Knockin' A Jug; Squeeze Me; I've Found A New Baby; Nobody's Sweetheart; The Blues Pt. I; The Blues Pt. 2; Spain; Just A Mood (Blue Mood); On The Sunny Side Of The Street; Body And Soul; One O'Clock Jump; Sent For You Yesterday; Every Tub; Swingin' The Blues; Jumpin' At The Woodside; Shoe-shine Boy; Backwater Blues; Reckless Blues; I'm Down In The Dumps.

CD2 (Oxford): Since My Best Gal Turned Me Down; Way Down Yonder In New Orleans; One Hour; Basin Street Blues; Bugle Call Rag; Oh Peter; Spider Crawl; I Would Do Anything For You; Yellow Dog Blues; The Eel; Home Cooking; Chasing Shadows; I Ain't Gonna Give Nobody None Of My Jelly Roll; Carnegie Drag; D.A. Blues; Shine; I Wish I Could Shimmy Like My Sister Kate; Boo-Woo; Blues Of Israel; Life Goes To A Party; These Foolish Things; A Sailboat In The Moonlight; The Man I Love; Tea for Two.

CD4 (Minority Interest): Flamingo; How Come You Do Me Like You Do?; No Rollin' Blues; Hello Little Girl; How High The Moon; Bird Of Prey Blues; Jeep's Blues; One O'Clock Jump; You're The Top; Have You Met Miss Jones?