By EYAL HAREUVENI
October 29, 2013
Sign in to view read count 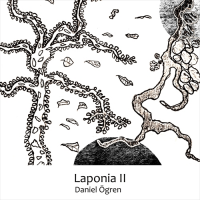 Swedish guitarist Daniel Ögren's second musical tribute to the landscapes of Northern Sweden (after Laponia, Hoob, 2011) is a fascinating and suggestive journey. Ögren, member of singer- songwriter Anna von Hausswolff's band, succeeds to create a musical equivalent to the scenery of bare mountains, the sound of clear streams and moss-green hills into insightful and nuanced soundscapes that trigger the imagination. If mountains could sing, most likely Ögren would be their musical ally.

As on the first tribute, Ögren chose an unusual setup of instrumentation that defies any attempt to categorize his music.The music moves between the experimental and dissonant to the sentimental and romantic back and forth within a few seconds, focused on its emotional core but still is highly reserved. The ten short compositions, documented on limited edition cassette and as a digital release, offer a contemplative conception of time and space, enabling time for thoughts or yearnings for such wide open spaces of undisturbed nature.

Each composition suggests a thoughtful perspective on nature. "Älg" (moose), one of the most experimental pieces, alternates between the extended techniques and chaotic sonic explorations of pianist Johan Graden and fractured pulse of drummer Christopher Cantillo to the poetic and meditative cello of Johanna Dahl, that sound as inspired by the sacred compositions of Arvo Part. The following "Winden" (wind), for solo piano with the sound of water streams, deepens the reverential atmosphere, and "The lakes," for guitar and cello, portrays the calming power of the nature. "Man sa att han inte hade någon stil" and "Vår i skogen" feature Ögren as a master storyteller. Accompanied by Rasmus Nyvall on the clarinet on the first, he sketches dramatic twists in the story with captivating elegance and charm, and mysterious and tense atmosphere on the latter, with the full band.