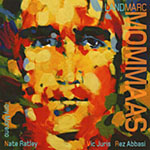 It has been said that if you throw a quarter off the Empire State Building you are almost as likely to hit a tenor saxophonist as concrete. But in the Selmer-toting multitudes of Manhattan, Marc Mommaas has established a unique voice and vision. He was born into an artistic family in Amsterdam in 1969 and took a Masters degree in Business in the Netherlands. But he has lived in New York since 1997 and earned a second Masters from the Manhattan School of Music. Mommaas is an erudite, sophisticated academician. The good news is that he doesn't sound like it.

Consider his ensemble concept on Landmarc: his own understated, veering tenor; the intuitive guitar of Nate Radley; the drums of Tony Moreno, who plays everything but time. On five of nine cryptic Mommaas compositions, a second guitarist joins, either Vic Juris or Rez Abbasi. There is no bassist.

The title track has mixed meters and a melody that gets longer phrase by phrase. The pieces with two guitarists present layers of melody and counterpoint. But the primary sonic impression is sparseness and openness, not complexity. Mommaas' instrumental format is so conducive to creative expression that it is surprising more jazz musicians haven't tried it. Of course, not many trios (or two-guitar quartets) could function in such a stark landscape. Moreno rustles in the near distance, Radley threads mysterious chords or ticks like a Dali clock and Mommaas flows into one unexpected idea after another. For such a bold thinker, Mommaas has uncommon patience and discipline. He never seems to hurry, yet on the title track and "Cassavetes Caravan" and "ASAP," his momentum carries him into whirling dances. But the best pieces are the hypnotic slow burns and the liberated lullabies. The rubato "Folksong" (inspired by Keith Jarrett's "My Song") and "Little One" (for Mommaas' daughter), are delicate yet fervent.

Landmarc is a breakout recording for Mommaas and also for Nate Radley. There are guitarists who live on the edge and guitarists who play pretty. Few, like Radley, do both. His solos here are intriguing elaborations of the ideas that Mommaas has put in place and his accompaniment suggests rich new ideas for Mommaas to pursue.