Charlie Haden: Land of the Sun

By JOSHUA WEINER
October 18, 2004
Sign in to view read count 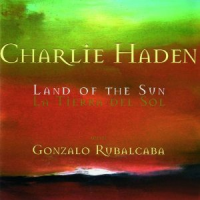 Needless to say, this gentle music is miles away from the fiercely avant-garde work with Ornette Coleman and his own Liberation Music Orchestra that made Haden's name in jazz. This is not necessarily a problem in itself; of more concern is how close a few of the arrangements (e.g., "Fuiste Tú (It Was You)," "Nostalgia") veer towards smooth jazz, and the extent to which the leader's muscular, robust playing seems penned in by the fact that this music doesn't always necessarily lend itself to improvisation. In any case, Haden seems firmly entrenched in this type of project now, and his heart is clearly in it. This, and much lovely playing by everyone in the group, (especially Rubalcaba, who is so much looser and more likeable here than on his recent, rather impenetrable Paseo ) lends the music an emotional power that the pretty but sometimes overly sentimental melodies might otherwise lack.

Among the highlights is a gorgeous shifting string of duets between Rubalcaba and flautist Oriente Lopez, Rodriguez, and Haden on "Canción De Cuna a Patricia (Lullaby for Patricia)." Rodriguez's concluding flugelhorn solo captures the enigmatic feel of late-'60s Miles perfectly here, enhancing one of the album's best melodies. Lovano's soft-toned work on "Esta Tarde Vi Llover (Yesterday I Heard the Rain)," one of the album's two non-Marroquin standards, is up to his usual high standards, and coaxes Rubalcaba into some of his best playing. The concluding track, "Canción a Paola (Paola's Song)," is by far the best jazz vehicle on the album, with great solos and nicely scored ensemble sections propelled skillfully by Ignacio Berroa's drums.

Land of the Sun might have benefited from one or two more upbeat arrangements; at over an hour, the balladic tempos and lulling tunes can be somewhat soporific. Nevertheless, Haden's latest Latin venture succeeds on its own terms, and it should find a broad and appreciative audience.