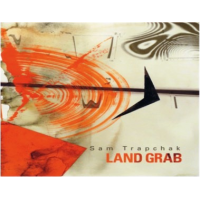 This time around, the music delves into freer and more adventurous designs with plenty of room for the band to explore Trapchak's left-of-center arrangements. Tom Chang's gnarly electric guitar brings that jazz/rock edge whereas saxophonist Greg Ward's fluid alto brings to mind a Steve Coleman-like M-Base vibe. Drummer Christian Coleman is the newcomer yet has plenty of technique and fire while Trapchak solidifies the complex moods and rhythms with his sinewy yet supple acoustic bass.

Six tracks crisscross both the familiar and the surreal. The familiar comes into play in "Lumpy's Blues" switching between a straight blues meter and a hard groove vamp that boasts blistering guitars and a thundering bass solo before Ward lets loose rapid-fire flurry of soulfulness. It's followed by the enigmatic "Beautiful Furious" as the band artfully move between moments of quietude, tension, and complete chaos like the fictional Dr. Jekyll before his inevitable transformation to his alter-ego Mr. Hyde. This blending of ideas is what makes Land Grab enjoyable on a number of levels.

While growing up listening to Blues, Motown and R&B, Trapchak's recent studies of renaissance style counterpoint and modes outside of the mainstream inform his compositional style. These wide ranging influences are present in "Breathing Room"'s striking opening bass solo and a Zen-like ambiance reminiscent of some 1960's psychedelia or the title track's episodic journey from quiet contemplation to a blazing Middle-Eastern-like groove which brings a close to another enjoyable release from the intriguing bassist/composer.