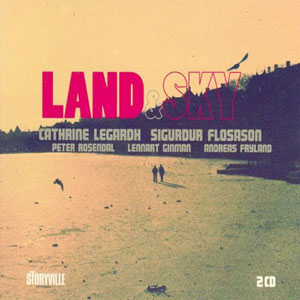 A bilingual double album, liable to confirm common prejudices concerning Scandinavians: that they are doomy, brooding folks, given to staring at candles on dark winter nights, while meditating on the quintessential meaninglessness of life. To quote Cathrine Legardh's text for "Pumpkin":

When life steps into character
I am just a feather in a storm
A pumpkin with a worm—deep deep inside.

Or, then again, this time on "Morning In May":

Images, black and white in my head
like an old motion picture
And there we are—dead center screen
on a bench in the shade / of a sun that just lost its glow
The wind is crying from afar:
Where did all the colors go?

The Danish poetess—perhaps best known as a performer for children in her homeland (see the unintentionally hilarious video included)—has teamed up with Icelandic alto saxophonist Sigurdur Flosason for this double album, celebrating the dubious delights of what Tom Lehrer so aptly described as "sliding down the razor blade of life." The trouble is that while Professor Lehrer did it tongue-in-cheek, Legardh is heart-on-sleeve. Her angst is for real and she's keen to share it. In English on Land, Danish on Sky.

But, as with the emotional tone, tempos vary very little and ultimately the songs seem to blend into one interminable dirge. "I mitt hjertekammer" is an exception to the rule. It almost swings, and features a fine solo from Flosason, marred only by demented background scatting by Legardh.

"Little Red Devil" kicks off promisingly ("Being in hell can be almost divine"), but loses its way. "Hills of Denial" tackles the problem of alcoholism, a favorite topic in Scandinavia, though in haltingly banal fashion:

Rumors say you had it all
A golden ring, a great career
Now your aims are small
All you bring to bed is beer.

There's only one response to that: Skål!